Turn That Noise Down - Nik Kershaw 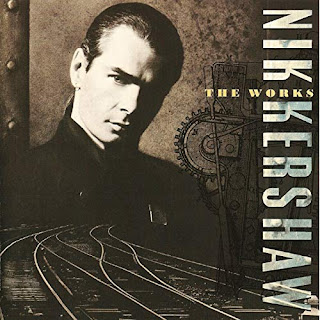 So many well-known albums turn 30 this year and Steve Taylor-Bryant and Susan Omand travel back to 1989 to revisit some of the sounds of their youth that made parents shout "Turn that noise down!" This week, Susan goes for The Works of Nik Kershaw...

For me, Nik (without a c) Kershaw’s 1989 album The Works is a little bit of a misnomer. It was apparently meant to represent “the collected works” of his music and yet this is not a greatest hits album. His best-known songs are nowhere to be seen – there’s no Wouldn’t It Be Good, no I Won’t Let the Sun Go Down on Me, not even Don Quixote. No, this is an album of all new music at the time that, well, flopped commercially. There were two singles due from the album; One Step Ahead reached the heady heights of no 55 in the charts and Elisabeth’s Eyes failed to bother the top 100 at all. Quite a change from the pinnacle of his fame back in 1984/5, when his albums Human Racing and The Riddle rode high.

So what went wrong? Listening back to the album now, nothing really. The music is still very “Nik Kershaw” – if you listened to any track here without knowing who it was, then you’d guess it was him. There’s the over-produced synth, the oddly reggae/latino fusion beat, the fancy-schmancy electronic noises and bright brash brass underneath his very recognisable voice. It’s all very mid-80s.

On second thoughts, that’s maybe where it did go wrong – by 1989, the music scene had moved on five years and he had stayed still. It had all been done before and better, both by him and others, and there’s nothing really new and interesting on this album. None of the songs are actually awful, it’s all just a bit … meh. No surprise then that this was Nik Kershaw’s last album for 10 years, although he had notable hits writing for other people in those years, particularly with “that song” for Chesney Hawks in ‘91.

I wanted to try and pick a track off The Works for you to listen to, but I couldn’t help thinking that none of them were quite as good as his earlier work. So Wouldn’t It Be Good if I could pick one of those instead?