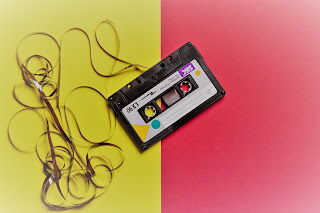 Susan Omand listens to the radio and has a bit of a rant. Again...

It all started with the latest offering from the late (and great - yes, he was mostly good at what he did) Avicii. His currently charting song SOS, featuring Aloe Blacc, reminded me so much of something else but, for the life of me, I couldn't think what it was. Then, a few days ago, I got stuck doing a 5 hour drive with only local pop radio to listen to (for the local traffic reports) and SOS came on the radio again. As I was driving I started to hum along mindlessly, as you do, then started singing the words to a completely different song [it's a good job she was alone in the car, because we've heard her singing - Ed] and, YES, the melody is a pretty blatant rip off.

Now I'm all for sampling, in its proper sense, where a small piece - a phrase, a riff, an idea - is taken from another song and something new and innovative is done with it. Think of it like collage or even fan art where you take someone's creation as inspiration and do your own thing with it. One of my absolute favourite sampled tracks is Groove Armada's At the River. And I am fascinated by things like the WhoSampled website where you can find out which song snippets are used in which other songs.

But, in my view, there is a limit to the amount of another song's melody you can use without it being a bit of a cheat. So the Avicii song got me thinking - it passed the time on the five hour drive - of how many other blatantly plagiarised songs I could think of.

Here's five that really annoy me.


All Saints - Never Ever

The Police - Every Breath You Take


and we can't forget the infamous one,


I must say though that the other song I was going to add to this list, I was really surprised to find out had "flipped" the idea on its head. I had honestly thought Forget Me Nots was newer!

The 1982 song by Patrice Rushen - Forget Me Nots

Is well and truly ripped off by a certain 1997 film theme song by Will Smith.


I'm sure there are hundreds more that you can annoy me with so do feel free to let me know - after all there can be only so many combinations of the 13 notes in a scale, so it's bound to repeat at some point.