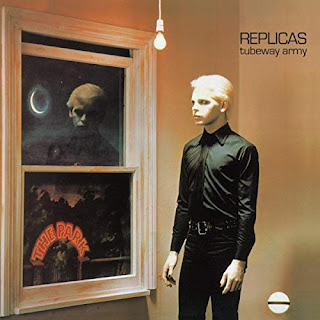 Inspired by our series of articles looking back at music released 30 years ago, Jimmy Hunter takes a step further back in time to give us a Song of the Day 1979. This week, he is so fragile...

There are a number of charting singles this week in 1979, and in the coming weeks, that really make me remember the summer of that year. This doesn't fit into that "feeling" but it's right in there with all my memories - just not of the summer. Don't try to figure it out, just take a wander with me.

When I first heard Tubeway Army's Are Friends Electric I found it, well, boring. What was surprising was that my mother went out and bought it. After a number of listens it grew on my and I do love it, but that's not the point of this week's article.

No. This week's choice is the b-side of that single: We Are So Fragile. For whatever reason I played this side before the a-side, having heard that many times, and I was hooked. From the trance-like electro intro to the screaming synthesisers and guitars, Gary's accent bending the lyrics in ways reminiscent of Chris Difford, this track still give me goose bumps and it electrified me (pun intended) when I first heard it.


Its a-side is a rich and rambling composition where this is a seemingly decent b-side. But I beg to differ. Taking nothing away from AFE this was always strong enough to be a single in its own right. Many may disagree but the same happened 4 years after this with Heaven 17's Temptation, and its b-side of We Live So Fast.

See for yourself - I always thought Gary Numan to be ahead of his time and I don't think his look or sound has "aged", but that's only my view given how much I love his work - here's a live version of our SotD79 for this week, recorded in 1979.