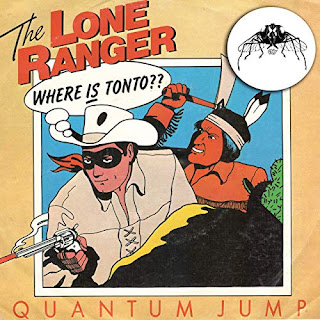 Inspired by our series of articles looking back at music released 30 years ago, Jimmy Hunter takes a step further back in time to give us a Song of the Day 1979. This week, it's hi-yo silver away for The Lone Ranger...

I'm aware that I've either liked or outright raved about some of the records I've reviewed. Or at the very least, I've been somewhat equivocal. It's time to change that and this week's choice is a record I've never liked. However, it's one I remember very clearly and it does stand out - it also has a rather potted history.

Dear reader, this week we're listening to The Lone Ranger by Quantum Jump. Now I'm sure I'll be forgiven for mixing up Rupert Hine, lead singer and founder of the group with B.A. Robertson (of Bang! Bang! fame later this year) [yes, I thought it was him too - Ed] and that's because of the soft permed hair. And, er, talent.

Perhaps I do them a disservice. Well, Hine at least, for as of this year he's clocked up 50 years in "the biz" and by all accounts, still going strong. However, the band formed in the early 1970s and by 1976 had a record deal. The Lone Ranger was released and Tony Blackburn made it "record of the week" on his Radio 1 breakfast show. This brought it to the attention of the stuffy BBC management who instantly banned it for its (vague) references to drug taking and homosexuality (also similarly banned was Love To Love You Baby by Donna Summer in 1974 for being "overtly sexual" and Relax in 1984 by Frankie Goes to Hollywood for being "too gay" / singing about gay sex).

The single flopped because nobody heard it. After another low selling album the band dissolved in 1977. Then, the comic and broadcasting genius known as Kenny Everett discovered it and played it on his commercial radio station. Sales took off and the band reformed ... temporarily. Now, why don't I like it? Well, it's dull. It has no texture, no light or shade and for me, no musicality.

But I was fascinated. Fascinated by the not so very vague references to drugs and rather clear references to The Lone Ranger and Tonto sharing rather more than "manly wild west adventures" together. I still found it depressing. But at least one of you will be saying "but what about the funny word at the beginning"? Well, here it is:

No don't be impressed, it means absolutely nothing. But they made it sound Native American because the music itself keeps pace with the theme tune to the US TV programme - one of the regular Saturday morning UK kids' TV programmes. The word itself is based on a Maori word which is the name of a hill in New Zealand.

So see and hear for yourself - here's the official video. In my opinion, as dire as the record. Enjoy!!