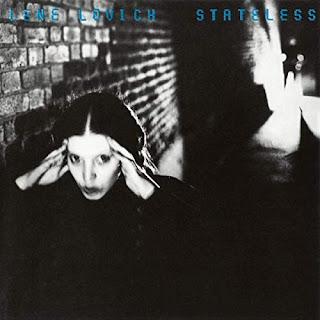 Inspired by our series of articles looking back at music released 30 years ago, Jimmy Hunter takes a step further back in time to give us a Song of the Day 1979. This week, Say When...

Prepare to be gushed at. I've been waiting for this. Waiting for a long time! I said last week something about remembering where you were when you first heard a record - well stuff that I'll just get right to it. My choice this week is utterly amazing Say When! by Lene Lovich.

I could write a thousand posts and never get tired of telling you how much I love this record and its singer. It just fills me with sheer joy! It NEVER fails to cheer me up, it ALWAYS makes me smile and I DANCE whenever I hear it!

There. I've gushed and made some tea so I've calmed down. Since Lucky Number was a hit earlier in 1979 Lovich had a big fan in me. She has her own definitive style which blends the very different styles of punk and new wave but not goth. She's not a goth and never has been.

Right from the very start the hook gets you - doo-doo-doo-doo-doo-doo-doo-dodododooooooooo-doooooooo. Her vocal style is unique and genuine - not a gimmick, as some music "journalists" said at the time and certainly not borrowed from elsewhere. Some even claimed she was a "professional screamer" for horror films because of her vocals. Idiots.

The record has a theme. It's about an encounter with a date but on her terms - a precautionary note. An encounter not dominated by the man. Fairly simple context but very cleverly wrapped up in delightful prose:

Well I'm all revved and ready, baby
you're a man and I'm a lady
better turn your eyes from this body of mine
I don't want you to be ahead of our time


After this record and Lucky Number being big hits she went on to record some cracking records (Bird Song) and I much preferred her version of I Think We're Alone Now even to the original, but certainly to any others. However she didn't do much afterwards in terms of recording and commercial interest. Recently turned 70 she's still gigging and has mainly been touring with the Lene Lovich Band (I narrowly missed them when I lived in London) which says all you need to know about her energy and passion.