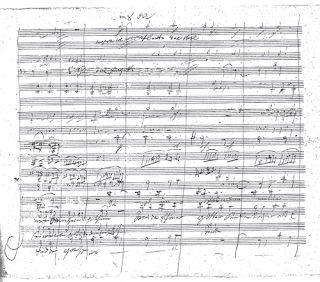 You may need a liiiittle bit longer than the usual 5 minutes for today's SotD as, instead of being a Song of the Day, today's is a Symphony of the Day! Here's the full performance of Beethoven's 9th Symphony, first performed on this day in 1824...

The Ninth, or "Chorale," Symphony, involves a massive orchestra, choir and soloists and, despite his deafness, Beethoven apparently insisted on conducting the piece himself for its premiere. At the end, the audience applauded wildly, but Beethoven was unaware until one of the soloists “plucked him by the sleeve and directed his attention to the clapping hands and waving hats and handkerchiefs…then he turned to the audience and bowed.”

The performance below was given on 7th May 2015 by the Chicago Symphony Orchestra, as conducted by Ricardo Muti and has been made freely available online.

Oh and here's the timings of each section in case you want to skip bits (which you don't, do you) along with the listening notes from the CSO website.

The symphony begins in an unusual way, growing gradually from absolute silence to a peak over 16 measures. This opening is reflective of his internal struggles—his hearing loss, his difficulty with communicating and his struggle to compose music. As you listen, consider Beethoven’s state of mind while writing the piece, and see if you can hear how he represented his personal challenges in the music.

This movement is a Scherzo, the Italian musical term for “joking or playful.” Though it opens in a rather serious way, listen to the contrasting section [from about 24:55] for the playful tone Beethoven uses in the music. Notice the way that he cleverly weaves the melodic lines between instruments, while still maintaining a joking character represented by the rhythmic ideas he uses, and the staccato walking accompaniment

The tempo, or the speed of the music, is much slower than the previous movement. The contrast between the second movement and the following movement is very important.

The famous theme “Ode to Joy” makes this movement one of the most recognisable in all of classical music - it's been used regularly for themes on TV like Eurovision. This movement is also unique because of Beethoven’s use of a choir or chorus. The text that Beethoven used comes from a poem that he had long wanted to set to music, Friedrich Schiller’s “Ode to Joy.” In his poem, Schiller states that in a new age the old ways will no longer divide people and that “all men become brothers.” This idea of universal brotherhood appealed to Beethoven so much that he wanted to celebrate it.


So, now you know what to listen for and when, get your air-batons at the ready and conduct along - just try not to hit anyone accidentally if you're on the bus.