Review - The Comedy About A Bank Robbery 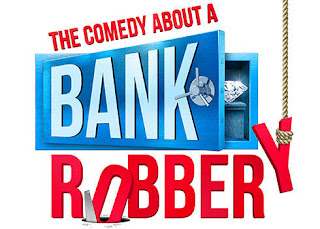 Holding on to her jewels, Susan Omand went to The Comedy About A Bank Robbery on its recent run in Edinburgh...

Summer 1958. Minneapolis City Bank has been entrusted with a priceless diamond. An escaped convict is dead set on pocketing the gem with the help of his screwball sidekick, trickster girlfriend… and the maintenance man. With mistaken identities, love triangles and hidden agendas, even the most reputable can't be trusted. In a town where everyone's a crook, who will end up bagging the jewel?

I first came across Mischief Theatre by accident (ironically) when I caught Peter Pan Goes Wrong on Christmas TV a few years ago and it surprised me that I enjoyed it so much, watching a play about an Amateur Dramatics group who get a pantomime so badly messed up. So, when I saw that a new show by the same company was heading to The King’s in Edinburgh last week, I thought it would be a great excuse to renew my acquaintance with live theatre.

The Comedy About A Bank Robbery is, exactly as it says, a comedy about a bank robbery. Gone is the backstage chaos of the “play within a play” aspect of Mischief Theatre’s previous shows – The Play That Goes Wrong, Peter Pan Goes Wrong and A Christmas Carol Goes Wrong. Instead we have a straight (sic) comedy but it’s still clever enough not to take itself too seriously (I realise comedies shouldn’t take themselves seriously but I know what I mean) and there are a few knowing nods to the technicalities of putting the show on, even though it is not the main focus of the play.

The Comedy About A Bank Robbery, for me, had the feel of an incredibly slick Fringe play, and that is not at all a criticism. What I mean is, for a small cast with some playing multiple roles, they did a superb job of keeping the flow and energy going on stage. The acting was top notch across the board, I bought into all the characters and you could really tell that this is a group of actors that is used to working together as they were very much at ease with each other. Favourite for me was the flamboyance of David Coomber as Prison Officer Neil Cooper, playing up to, but never over-doing, the camp and silliness. And I must say I was impressed by the (albeit unexpected) singing of both Ashley Tucker as Ruth Monaghan and Jon Trenchard as bank clerk Warren Slax. 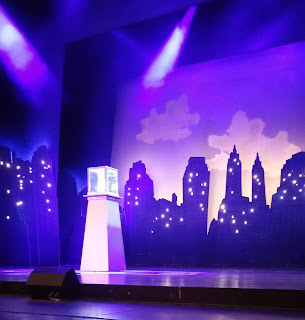 I will admit that I didn’t find the show as funny as many people in the audience but that was more to do with my taste in comedy than any fault of the show; there was a lady in the row behind me who I thought was going to keel over she was laughing so hard. There was a lot of physical comedy and slapstick (literally in one case*) with several of the actors showing great stamina and agility. The skill and bravery needed by Warren (Jon Trenchard) in the scene where he is harnessed to the office wall (not nearly as odd as it sounds) brought to mind the fearlessness of Harold Lloyd and the scene with Sam (Seán Carey) trying to get out of the apartment was like watching Norman Wisdom at his best. I must admit the mimed conversation in that scene between Caprice (Julia Frith) and Sam was hilarious. Likewise, the spoken dialogue throughout was also intelligent, with a well-wrought edge to some of the jokes that made you think twice about why you were laughing. What I did find a little tedious though was the amount of deliberate over-repetition of gags but that’s maybe because I don’t like the pantomime style of humour; once was very funny, twice, ok for those who didn’t get it the first time, but after 4 or 5 different stagings of the same jokes (extra-large moustache I’m looking at you in particular here), they lost any humour for me that might have been there to start with.

Talking of staging though, I must mention the set design as it was really clever how the backdrops folded out and back on themselves to create quick set changes. I particularly liked the way the wall with the bank door in could be moved on a hinge so you can be outside the building as well as inside when people walked through it. And the re-use of props was ingenious and funny in itself – I laughed at the office chair motorbike and loved the fact that changing drivers in the car just meant handing over a steering wheel. The highlight of set design though must be the “top down” view of the bank office as the robbers are clambering through the air ducts. It has to be seen to be believed.

All in all, it was an enjoyable evening and a great way for me to get back into watching live theatre. Think of The Comedy About a Bank Robbery as a pantomime version of Airplane crossed with a PG Woodhouse style farce all set in a 1950s bank and you pretty much have it. Well worth seeing if that’s your kind of comedy.


* A “slap stick” is a prop made from two thin slats of wood, which 'slap' together when striking another actor, with little force needed to make a good and funny noise. Poor Warren bears the brunt of a prolonged thumping with several objects, including a slap stick, in the play.

The Comedy About a Bank Robbery is currently on tour. Find out where and how to book tickets here.