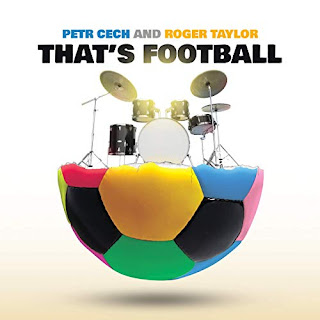 Yes you read that right. Cech, who is retiring at the end of the 2018/19 season, is also a keen drummer and wrote the song himself about what football has meant to him. All proceeds from the song will go to the Willow Foundation, which was set up by former Arsenal goalkeeper Bob Wilson and his wife Megs to provide special days out for young people battling life-limiting, life-threatening and serious conditions.


Cech said: "My career is coming to an end and I was thinking how to look back and put those amazing 20 years into words. There is a lot of emotion in playing football and also with music, I wanted to bring those emotions from football through music."

He added, "When I asked Roger about the idea he was up for it and we started to make this happen. To have such a legendary musician do that with me is something really special for me. I have been a fan of Queen my whole life, and to work in the studio with Roger on this was an incredible experience.

"I’m also a big fan of the Willow Foundation because of its amazing work as a charity. Bob and Megs really deserve to be supported for all the effort and work they put into it. He’s an Arsenal legend on top of that.

Cech has won every possible title during his 15 years in the Premier League with Chelsea and Arsenal, establishing himself as one of the best keepers of all time and setting new records. The former Czech international has won the Champions League, four Premier League titles, the Europa League, five FA Cups, four Community Shields, and three League Cups. He also has the record for the most clean sheets in Premier League history – currently at 202.

The song, written by Cech and Taylor is available now on all digital platforms.