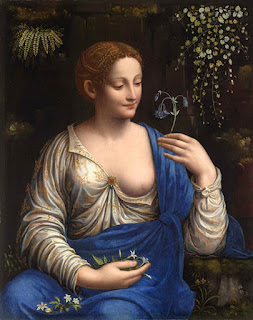 The National Gallery is marking the 500th anniversary of Leonardo da Vinci’s death with a display presenting the exceptional loan of the recently restored 'Flora' by Francesco Melzi from the State Hermitage Museum, St Petersburg...

Francesco Melzi (1493–1570) was a wealthy gentleman of Milan, and the favoured assistant and companion to Leonardo in his final years. As his primary heir, he was largely responsible for preserving Leonardo’s notebooks and drawings for posterity.

Though Leonardo’s writings and inventions were not given due recognition for centuries, the legacy of his painting style was immediate and substantial. The term ‘Leonardeschi’ has since been used to identify artists centred in Milan who were taught by or associated with Leonardo, or whose work bears his influence.

This exquisite painting by Francesco Melzi depicts Flora, the goddess of springtime and flowers, seated in a leafy grotto sprouting with fern and ivy. Flora’s exposed breast and the way she tenderly inspects a sprig of aquilegia – a symbol of fertility – emphasise her role as ‘mother of flowers’. On her lap she caresses a spray of jasmine, signifying purity, beside anemones representing rebirth.

Recent restoration undertaken by the State Hermitage Museum has uncovered the picture’s true colours, including the powerful ultramarine blue; and hidden details have been revealed, such as the flowers growing from the walls of the dimly lit grotto. Infrared reflectography has also shown that Melzi ensured anatomical correctness by modelling Flora’s naked figure before adding her clothing.

The painting reflects the influence of Melzi’s teacher, Leonardo, to whom it was attributed at the time of its acquisition from the Dutch Royal collection in 1850. The female facial type with its downcast look is characteristic of Leonardo’s Milanese style, as is the mastery of subtle modulations of tone, known as ‘sfumato’. Melzi has taken Leonardo’s meticulous approach to painting plants and also replicates the complex hair-styling he uses in other portraits.

Director of the National Gallery, Dr Gabriele Finaldil said, “We are delighted to be able to mark the 500th anniversary of Leonardo da Vinci’s death with a display presenting the exceptional loan of the recently restored ‘Flora’ by Francesco Melzi .The State Hermitage Museum has long-standing and close ties to the National Gallery and this Room 12 display is a superb example of international museums working together.”

Professor Piotrovsky, Director of the State Hermitage Museum, St. Petersburg, reciprocated with “We are excited to have loaned ‘Flora’ by Francesco Melzi to the National Gallery and to see her as the central focus of this fascinating display which explores the work of Leonardo’s closest friends and disciples. This represents the first time that ‘Flora’ has been seen outside of Russia since it was restored by Maria Shulepova, revealing details and rich colouring which had been lost for decades under layers of old varnish. We hope that visitors in London will enjoy seeing this rare masterpiece by Leonardo’s favourite pupil, and we are pleased to further strengthen our long and valued friendship with the National Gallery.”

Two works by Leonardo – The Virgin of the Rocks and The Burlington House Cartoon – can be seen in Gallery 66 of the National Gallery and other National Gallery works featured in Leonardo’s Legacy: Francesco Melzi and the Leonardeschi include: