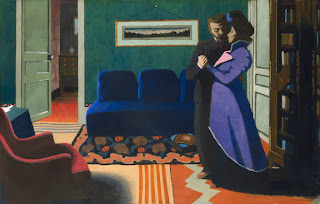 Opening at the end of June, the Royal Academy of Arts will present a survey of paintings and prints by the Swiss artist Félix Vallotton (1865–1925)...

This will be the first exhibition of the artist’s work in the UK since 1976 because, although greatly admired in his native Switzerland, Vallotton remains relatively little known elsewhere. The exhibition will serve as a rare opportunity to discover the highly original and innovative work of this often overlooked artist. 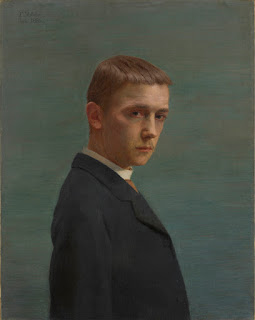 Comprising around 100 works from public and private collections across Europe and the U.S., the exhibition will demonstrate the intensity of Vallotton’s unique vision by bringing together outstanding examples from every period of the artist’s career. A sense of disquiet runs through much of Vallotton’s oeuvre, and as such the legacy of his vision has found echoes in later twentieth-century art; in the German New Objectivity movement of the 1920s, in the American painter Edward Hopper’s studies in alienation, and perhaps even in the films of Fritz Lang and Alfred Hitchcock. The exhibition will be organised in thematic sections. The first will present Vallotton’s work from the 1880s, following his arrival in Paris at the age of sixteen. Enrolling at the informal Académie Julian, Vallotton displayed a remarkably precocious talent. He avoided the contemporary movements such as Impressionism and turned instead to artists of the Northern and Dutch traditions, as is evident in the detachment and cool realism of his earliest known self-portrait, Self-portrait at the Age of Twenty, 1885 (Musée cantonal des Beaux-Arts, Lausanne) and the linear clarity of the painting The Sick Girl, 1892 (Kunsthaus, Zürich). 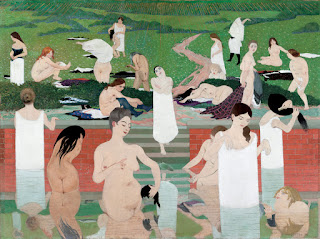 The second section will bring together work from a period of radical development for Vallotton. In the early 1890s he formed ties with the Nabis, a group of avant-garde artists including Pierre Bonnard and Edouard Vuillard. Like them, Vallotton was an attentive observer of contemporary life in Paris, though his unsparing caricatural illustrations and satires of Parisian society set him apart. It was through the Nabis that Vallotton became part of a circle of writers, critics, and artists surrounding the influential cultural periodical La Revue blanche, later becoming principal illustrator, a position that gave him considerable prominence in progressive Parisian circles. 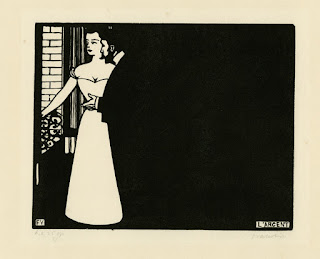 Vallotton distinguished himself as one of the great printmakers of his age. Magazine illustrations provided a stable income for the artist and La Revue blanche was a ready vehicle for his prints. Simple in design and bold in their use of black, his woodcuts provide sharply reductive imagery, owing in part to Japanese woodblock printing. Technically daring and bitingly satirical, the series Intimités, 1897–98, best articulates the artist’s unvarnished voyeurism and his exploration of the subtle power struggles and hypocrisies of the Parisian bourgeoisie. These are themes that are echoed in the celebrated paintings of interior scenes, 1898–99, such as The Visit, 1899 (Kunsthaus, Zürich), a masterpiece of enigmatic narrative. 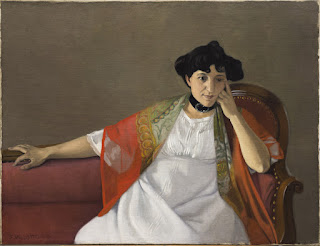 The closing of La Revue blanche coincided with Vallotton’s marriage to the wealthy widow Gabrielle Rodrigues-Henriques in 1899, bringing with it a new financial security that allowed him to concentrate on painting. His early claustrophobic, psychologically charged interiors open up to light-filled rooms of well-appointed apartments, and the synthetic style of the prints is replaced with a broad, painterly realism. A portrait of Gabrielle Vallotton, 1905 (Musée des Beaux-Arts de Bordeaux) pays homage to Ingres with its smooth, flawless surface and meticulous contours, coupled with the sitter’s pose, white dress and paisley shawl. 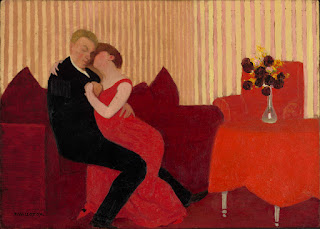 From around 1904 onwards, the female nude became Vallotton’s principal subject. This section of the exhibition will present works such as Nude Holding her Gown, 1904 (Private Collection) and Models Resting, 1905, (Kunst Museum Winterthur). Here the subjects are depicted in a distinctive, hard-edged style, indebted to artists of the Northern tradition such as Cranach and, again, Ingres in the classical coolness and smooth surfaces. 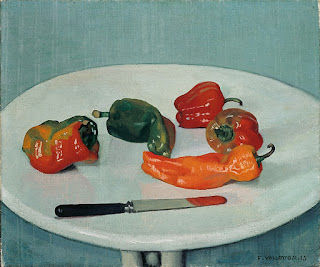 A section will focus on paintings and prints produced during the First World War, an event that profoundly affected the artist. The cover of his portfolio This is War!, 1916 (Musée d'art et d'histoire, Geneva), Vallotton’s last series of woodcuts, features splattered red ink on the cover, while the six images, in strongly contrasting blacks and whites, capture the danger and terror of the ordinary soldier fighting at the front. Vallotton also alludes obliquely to war in one of his greatest still-lifes Red Peppers, 1915 (Kunstmuseum Solothurn), in which the startling red of the peppers is echoed in the shocking, seemingly blood-steeped knife.

The exhibition will conclude with a survey of Vallotton’s landscapes and still-life paintings. This selection includes the artist’s remarkable paysages composés, landscapes based more on memory and imagination than composed from real life observation. These works often have a disturbing quality, as seen in the eerie stillness of Sandbanks on the Loire, 1923 (Kunsthaus, Zürich), painted two years before Vallotton’s death. 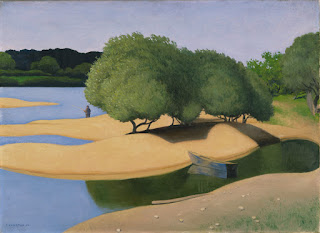 The majority of the loans in the exhibition have been generously lent by museums and private collectors in Vallotton’s native Switzerland. We would like to acknowledge particularly the contribution of the Musée d’art et d’histoire, Geneva, who has lent 41 of the artist’s greatest prints.

Find out more and book tickets at https://www.royalacademy.org.uk/exhibition/felix-vallotton