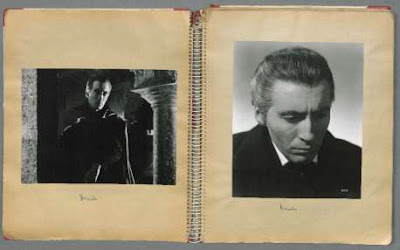 The BFI have announced that Lady Lee, Sir Christopher Lee’s widow, has donated his photographic archive, to the BFI National Archive...

The collection offers a precious insight into one of British Cinema’s most revered and recognisable stars, who would have been 97 years old today, consisting of photographic prints and albums collected and compiled by Sir Christopher Lee himself.

Spanning his entire film career this photographic archive includes a number of previously unseen on-set stills and contact sheets as well as photographic portraits from many of his most iconic roles including Dracula (1958) and its sequels, The Wicker Man (1973) and The Lord of the Rings: The Fellowship of the Ring (2001).

From one of the actor’s earliest film roles in the Ealing Studios classic Scott of the Antarctic (1948), right up to his work in the 2000s, the Sir Christopher Lee Archive serves up a unique first-person account of an extraordinary and prolific career, and features previously unseen annotated musings, revealing his crisp, dry humour. The collection spans more than 60 years, showcasing Lee’s many iconic roles and his remarkable acting range in a long and distinguished career that saw him honoured with a BFI Fellowship in 2013. Other films represented in this collection include Hammer classics such as The Mummy (1959), Rasputin the Mad Monk (1966) and The Devil Rides Out (1967) as well as The Private Life of Sherlock Holmes (1971), Sleepy Hollow (1999) and Star Wars: Episode III Revenge of the Sith (2005).

At the heart of the archive are three album/scrapbooks put together in the early 1970s and annotated (often amusingly) by Lee himself, spanning the years 1948-1972. Album one covers Lee’s first decade and a half as an actor. Some of his earliest roles include World War II drama They Were Not Divided (1950) and Captain Horatio Hornblower (1950) in which Lee played supporting parts (his annotation to They Were Not Divided quips “back to camera, as usual”). He spent ten years honing his craft in supporting roles before his breakthrough performance as The Creature in Hammer Studios’ The Curse of Frankenstein (1957).

Lee at one time held the Guinness World Record for the most on-screen sword fights. This album records an early and memorable example: Lee’s infamous sword fight with Errol Flynn in The Dark Avenger (1955) in which Flynn accidentally cut through Lee’s little finger. The album also includes a striking pair of portraits of Lee, almost unrecognisable, during his screen test for John Huston’s Moby Dick (1956), a part ultimately played by another actor.

Album two spans the 1960s, including horror classics Dracula Price of Darkness (1965) and The Devil Rides Out (1967) and showing Lee alongside fellow horror legends including Peter Cushing (The Skull, 1965), Vincent Price (The Oblong Box, 1959) and Boris Karloff (The Curse of the Crimson Altar, 1968) as well as on set with Hammer director Terence Fisher. Lee’s appearance in two separate series of popular TV programme The Avengers (in 1967 and 1969) are also captured here.

Album 3 covers a shorter period, from Julius Caesar (1970) to Death Line (1972). It showcases some of the special make-ups deployed in films such as The Scars of Dracula (1970) and also includes images from I, Monster (1971), which Lee once described as ‘one of the best things I’ve ever done’, as well as a number of behind-the-scenes stills from Billy Wilder’s late masterpiece (and one of Lee’s favourite films), The Private Life of Sherlock Holmes (1971).

Alongside the iconic images showcased in the albums, there are some surprising, funny and interesting choices, many previously unseen. Lee felt typecast for much of the period covered by these albums, but they nevertheless show his great versatility as an actor across a variety of characters, films and genres. They are all the more special for being selected, arranged and annotated by Lee himself.

Lady Gitte Lee said, “It was a great joy and an honour for my husband when he was awarded the BFI Fellowship in recognition for his lifelong contribution to the industry. I am therefore delighted that the BFI are helping to preserve the heritage of his legacy, by bringing Christopher’s photographic archive into the BFI National Archive. I am immensely proud of my husband’s achievements. One of Britain’s best-loved actors, he was a man who entertained audiences worldwide for more than 60 years. It gives me great pleasure that his photos will be seen and appreciated for generations to come.”

Nathalie Morris, Senior Curator - Special Collections, BFI added “We’re delighted to have been entrusted with this marvellous group of photographs which were collected and kept by Christopher Lee, one of the all-time cinema greats. These images wonderfully demonstrate Lee’s versatility and charisma as an actor, taking us on a journey from his early small parts through to his starring roles and then beyond, as directors sought him out for high profile supporting roles and cameos. The albums are fascinating for being assembled by Lee himself, especially as they also include his occasional, wryly-observed, comments. The BFI National Archive is incredibly grateful to Lady Lee for this generous donation.”

Lee’s collection will join other significant personal archive collections including those of Alfred Hitchcock, Alan Parker, David Lean, Ken Loach and Dirk Bogarde at the BFI National Archive John Paul Getty Jnr Conservation Centre in Berkhamsted, stored in optimal archival conditions. Once catalogued, the collection will be available to view by appointment, with selected material made accessible digitally through the BFI Reuben Library.