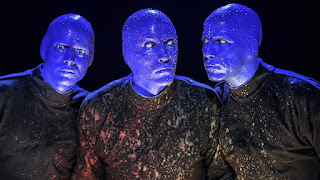 Every year, more than a thousand talented artists, musicians, actors and performers audition for Blue Man Group. Statistically less than one percent land the role and become a Blue Man.

Six trainees from all different backgrounds came to New York City in the hopes of becoming one of the few Blue Men and joining one of the world’s longest standing production. What they did not expect was a challenging journey of personal exploration into the most childlike and vulnerable versions of themselves. There will be struggles. There will be questions. There will be embarrassing moments. And there will definitely be paint. In the end, only be a few will be left standing on stage. With fewer than 100 Blue Men in the world, who will have what it takes to join the tribe.

"This series, told through the perspective of six incredibly talented actors, represents the most intimate look into the development of the Blue Man character that we have ever offered to audiences," said Randall Jaynes, Artistic Director, Blue Man Group, and Lead Blue Man Trainer. "We are not just giving a sneak peek into our process, but rather taking Blue Man Group's theme of audience interaction to a whole new level and embarking on a journey with these trainees as they both succeed and struggle to bring the character to life."

"What the actors don't expect is a challenging journey of personal exploration into the most childlike and vulnerable versions of themselves," Jaynes added.

Following the series finale, Blue Man Group will host a Live Facebook Q&A on June 27th with Randall Jaynes and Blue Man Group Casting Director Tascha Van Auken, and release additional bonus content, including a highlight reel and 'Where are They Now?' segments with the trainees.

You can watch the first episode below (it's only 10 minutes) then find the rest on the Blue Man Group YouTube channel as they are released.