Music - King of the Jews 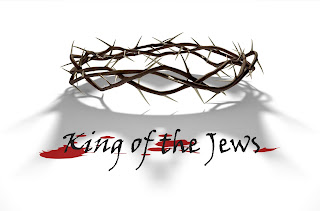 Susan Omand listens to King of the Jews, the latest release from film composer Daniel White and available now to download for free on Bandcamp...

I need to start with full disclosure. The composer of King of the Jews, Daniel White, is a friend of mine, whom I have known for nearly five years now, and I have been following his rise and rise as a film composer over the last few months with great interest. As such, I have been privy to a lot of “behind the scenes” listens to his works in progress and have heard the evolution of King of the Jews from its very beginnings, as his wish to compose a short piece of music to “soundtrack” Jesus’ discussion with his disciples on the Mount of Olives, through the full creation and production process, growing from a single short piece to three movements and then four, reaching its final, polished, release on Bandcamp yesterday.

Therefore, I don’t class myself as objective enough to provide you with an unbiased technical review of King of the Jews, but I do want to talk about it. You see, I am very much not a “religious” person myself, I do not follow any organised belief system nor worship any single deity and the written texts from all faiths are, to me, just stories; interesting books to read in themselves, often with good characters and intricate plot arcs, but not to be taken as literally true, as they, like all stories, are widely open to interpretation both by author and reader. However, I absolutely adore religious music. From chorales to carols, oratorios to requiems, ancient or modern, I’m there for it. It’s so cinematic and atmospheric, able to evoke emotion and create mental imagery, often without words, in a way that just brings me joy. I think it’s because music, and religious music in particular, has been seen through the ages as a way to tell stories to those not able to read for themselves. Therefore, it lends itself really well to the “film soundtrack” interpretive treatment and I’d like to give you a few pointers for what to listen out for (you can play each track separately on the links below) and bits that I particularly enjoyed.

Following Jesus and His disciples as they make their way to the Mount of Olives. Jesus gives His followers some words of hope as He again predicts His own death. Jesus prays to His Father and asks for strength to endure what is to come. He is betrayed by Judas and the guards arrest Him.

The thing I like most about this movement is the scene setting at the start. From the initial discordant crash, signifying the disciples leaving in disarray after the Last Supper, with their future plans and world in tatters, you get the oppressiveness of the heat, the flies and the foreign-ness of the country, along with a feeling of suspense and impending doom as short piano phrases crawl around the chromatic scale. There is then a beautifully poignant viola solo that is so sad, reminding me of Schindler’s List in its tone, broken into by that chromatic doom creeping back in, before evolving into a conversation between viola and piano that, again, is heart-breaking before that sense of danger and doom again returns. The high, serene flute is Jesus’ prayer to God before the calm betrayal He had foreseen at the supper, a discordant flurry as the guards take him away, followed by a gorgeous duet of violas playing Nearer My God to Thee in a minor key but drowned out by the guards triumphant drum march dominating all.

I Am Who You Say I Am

Peter denies knowing Jesus and He endures a trial at night by the ruling religious leaders. Jesus is handed over to the Romans and, after a vicious scourging, is condemned to death by Pilate and a blood thirsty crowd. Jesus is given his cross to carry as He begins his walk to Calvary or Golgotha.

This is stunning, definitely my favourite movement of the work. From the untruth of Peter’s denial in the strings, we suddenly appear in front of the jarring majesty of a pipe organ. This is the authoritarian but hypocritical religious leaders at the unlawful night-time trials, convicting Jesus three separate times, without response, before he is sent before the might of Pilate and the Romans, signified by the brass. You can hear the whips in the crash of the cymbals, the accusations in the guitar and again, the pacific acceptance of Jesus to his fate in the violins and his slog towards his inevitable death, before the Roman brass returns near the end with a slightly hopeful note. The Roman trials have found Him innocent of the accusations but Pilate bends to the will of the people and all hope comes crashing down in a cacophonous ending. Just glorious.


The Place of Skulls

Mocked by the onlooking crowds and mourned by His followers, Jesus' carries His cross through the streets of Jerusalem and up the hill to Golgotha (The Place of Skulls). His feet and hands nailed to the cross. Jesus is crucified alongside two thieves. After promising to see one of the thieves in Heaven, Jesus cries out to His Father, asking why has forsaken Him, and asks for forgiveness on behalf of those who have murdered Him. Jesus' death coincides with an Earthquake and the temple curtain is ripped from top to bottom.

A change of tone and change of pace for Act 3 as we go from orchestral to a much more prog rock concept. The accusatory guitars are back as the crowds push, jostle and taunt His weighed down trudge through the streets to the top of the hill with a choral drone underlying the footsteps in the drum, the sadness of his followers being echoed by viola and piano. A lift in tempo as the all too human fear for what is about to happen kicks in with a synth sweep, and you can hear the crash of the hammer driving in the nails. You can hear His cries, the return of the Roman brass and the suddenness of the quiet and reflective spell of viola and piano as He asks forgiveness is a striking counterpoint to the growing suspense of the synth. A sustained crescendo and choral blast as He dies on the cross and the earthquake erupts, ending with the rent of feedback as the curtain is torn down.

Three days later and Mary Magdalene is walking to Jesus' tomb, accompanied by some of her friends. They discover the stone has been rolled away and the tomb is empty. An angel declares that Jesus has risen from the grave. Over the next short while, Jesus appears to countless numbers and prepares His disciples for the coming of the Holy Spirit and tasks them to "preach the good news to all nations" He returns to Heaven with a promise that one day, He will return at the end of days.

There’s such sadness at the start of this, a melancholy flute and beautiful strings echoing the allusion to Nearer My God to Thee from the end of the first movement. A thunder roll of timpani and cymbal crash signify the discovery of the empty tomb with heraldic trumpets announcing that Christ is risen and a build of joy with a transformation to major key, a build of tempo and guitars as the crowds hear the news. There’s an altogether stronger, yet more tranquil, sound to the woodwind and piano that picks up after this as the disciples ready themselves for the task to come. The final ascension is absolutely jubilant as choirs overlay guitars, and it’s interesting to notice that the choral doesn’t resolve musically before the final crash of drums, showing that there is more work yet to be done.


That’s what I got from it anyway. As with all things, it is open to interpretation and question and you may very well hear things that I have missed. What I would say, though, is please don’t dismiss this work as something you “wouldn’t like” purely because you are not religious. You don’t need to believe, or even know, the stories in order to enjoy good original music.

You can download the album King of the Jews for FREE from Bandcamp HERE.