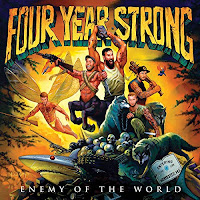 In an effort to further her musical education, Susan Omand has been set "homework" of listening to albums released after the 1980s that she has missed out on. This week she takes on The Enemy of the World ...

When I was warned, by #EducatingOmand’s Year 2 tutor Mr Ames, that Four Year Strong’s album Enemy of the World was “punkish” I must admit that I was expecting something quite different to what I got. Being of an age that I remember punk the first time around, I was expecting something a lot more vitriolic and violent, with anti-everything lyrics being spat over discordantly tortured instruments as the disaffected youth of the day set out to shock the establishment.

Instead, what I got was a good fun pop-punk album, upbeat and boppy, with superbly thrashy percussion, strong melodies and hooky choruses that would be great to sing along with at festivals. My go-to “cheer myself up” album is Michael Monroe’s Horns & Haloes, and this reminded me of that in a lot of ways, as I listened to this whole album with foot tapping, head nodding and a smile on my face.

I was going to do a track-by-track but, to be honest, they’re all variations on the aforementioned theme and that is no bad thing. Paul Revere’s Midnight Ride has marvellously dirty guitar and the riff reminds me of Rocket From the Crypt’s On a Rope, the brilliantly titled What the Hell is a Gigawatt (borrowing a line from Back to the Future) gets a bit raucous, but can be forgiven for the RAAR because of the great backing, and the title track Enemy of the World has fantastic slightly-off-tempo thundering drums and guitar bends that really delighted me.

My favourite track on the album though is Wasting Time (Eternal Summer). It’s really ear-wormy; good old-fashioned rock and roll that I caught myself humming mindlessly through the day.

So yes, this time you can count me as educated. I had never heard of the band or the album before now, but I will endeavour to seek out their back catalogue and will definitely add at least one or two tracks from Enemy of the World to my “cheery uppy” playlist.

Addendum: I went looking for the video for Wasting Time to share with you (find the audio of the album version here) and happened to stumble across this acoustic version. Those harmonies! Boy, these guys can really sing.