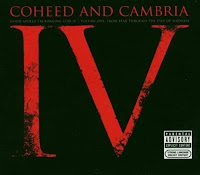 In an effort to further her musical education, Susan Omand has been set "homework" of listening to albums released after the 1980s that she has missed out on. This week it's *deep breath* Good Apollo, I'm Burning Star IV, Volume One: From Fear Through the Eyes of Madness ...

It’s not often that new (to me) music will make me stop whatever I’m doing and physically sit down between the speakers of the hi-fi and just… listen. This album is one of those.

From the evocative orchestration of strings on the first track, The Burning Blade, through the utter freakishness of Always and Never (kids’ voices always unnerve me) to the glorious Rush (pun intended) of Welcome Home, there is nothing boring about this album. I mean the instrument list apparently contains ukuleles and a didgeridoo! On a prog rock album! Woo-hoo!

For progressive it is. There’s thundering percussion counterpointed by soaring strings, dirty guitars overplayed by electronics, running water and demonic whispers, and truly beautiful harmonics carry the melodies as the story-telling lyrics dive deeper into your soul.

The weakest individual track on the album, for me, is probably also the most commercial sounding; The Suffering, one of three tracks released as a single along with Welcome Home and the video-only single release Ten Speed (of God’s Blood and Burial). However, it does fit okay as part of the over-all concept so I will forgive it.

By contrast though there is the absolutely mind-blowing quadrilogy suite of The Willing Well I-IV which takes up a good half hour at the end of the hour and a bit album and all four of these parts vie for my attention as a favourite. That intro in part I puts my hackles up (in a very good way) and the darkness of the tone, the distortion and layering of the voices, the use of whispers, all make it a highly disturbing listen. Then you get the light and bright almost Renaissance-fair sounding start to the second song (substitute flutes for guitar and bodhran for kick drum in your head and you’ll see what I mean) whose jollity of rhythm and key belies the negative lyrics in a way that only REM could do for me before. “You’ll burn in hell while they’re digging you out” tra-la-la! Hell, yes. This transitions after a few minutes into the almost Wagnerian operatic section, with a heavy syncopated rhythm and choral work over the bumptious guitars and aria-like repetitions of lyrics. All that’s missing is the brass! This is prog rock concept album at its best. The Willing Well III plays with your head if you’re listening on headphones (or between the speakers as I was) as the ambient noise pans from side to side. The music itself dives back into darkness and minor keys but still keeps the speed driving forward and that sudden slowdown shift into Part IV is perfection, leading on to a finale that gives Pink Floyd a run for their money which, in my book, is a huge, huge compliment. And that “hidden” track at the very end… genius.

Even after you’ve finished listening to the album, further reading is, literally, possible, because there is a graphic novel of the story on the album that was released at the same time, written by Claudio Sanchez, illustrated by Christopher Shy, which I think is a really neat idea and something that needs to be progressed with as the story, inasmuch as I understand it so far, is indeed a heroic tale.

So yes, Mr Ames, yes I am educated this time. Your much vaunted Coheed & Cambria really are as brilliant as you (constantly) say they are, a Pink Floyd for the new generation is no exaggeration, and I will absolutely be joining you to sing their praises from the rooftops as I work my way through all their other albums and discover the latest progression of prog rock. Just as soon as I find out what happens in the rest of this story first…