Turn That Noise Down - Green Day 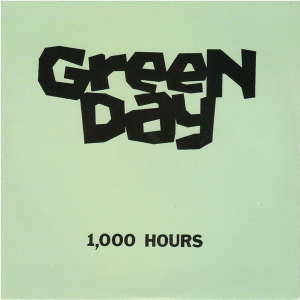 So many well-known albums turn 30 this year and Steve Taylor-Bryant and Susan Omand travel back to 1989 to revisit some of the sounds of their youth that made parents shout "Turn that noise down!" This week, Steve spends 1,000 Hours listening to Green Day...

How in all that is music are Green Day thirty f**king years old?! When their debut E.P. 1,000 Hours popped up on my list of thirty year old recordings I honestly thought it was a typo. These fresh graced punks can’t be my age, but they aren’t. Nope, they are older than me. These guys have been like my cool friends for so many years that I forgot that I don’t know them and that we are all ageing. Once over my shock (more therapy on expenses, great - Ed) I sat to listen as I would any album for review purposes and found that Green Day as men may age but their music doesn’t.

1,000 Hours consists of four tracks that you’d happily pay for as a release today. They don’t sound three decades old but they are distinctly Green Day. Opener and title track 1,000 Hours is instantly recognisable and track two Dry Ice the same. The third song, Only of You, I seemed to connect with a lot more, although the drums, which is what I’m usually listening for, aren’t that different to the other tracks. It just got me in my gut more I guess. The One I Want closes out the four track release and none of the songs have a weakness. The only part that made me finally realise the ageing thing was the lyrics. These were teenage boys writing about love, about not getting the girl or not knowing how to, the lyrics whilst poetic and elegant as you’d expect from the penmanship of Billie Joe Armstrong, are light years away from the anti-Bush political agenda tunes that make up American Idiot. I finally saw that as I grew up, girls, not knowing who I am, into an older man who cares and wants to leave his mark on the world, so did the band.

1,000 Hours is a treat to listen to but a great starting point to analyse your own growth as a man through the back catalogue of band you’ll never tire of listening to.