Turn That Noise Down - Deacon Blue 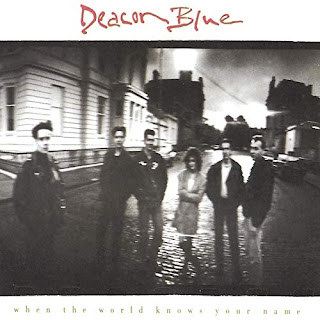 So many well-known albums turn 30 this year and Steve Taylor-Bryant and Susan Omand travel back to 1989 to revisit some of the sounds of their youth that made parents shout "Turn that noise down!" This week, Susan looks back on When the World Knows Your Name by Deacon Blue...

As I said when I reviewed their debut album Raintown for Turn That Noise Down a couple of years ago “If you were anywhere near a radio in Scotland in the late 80s and early 90s, chances are you would hear a Deacon Blue song” and that was very definitely true of this, their second album, When the World Knows Your Name. By then, the world most definitely knew the name of Deacon Blue and the album saw five of the 13 tracks being released as singles and hitting the top 10.

I also said in that article, probably controversially, that I preferred the songs on When the World to Raintown and, on listening again now, yes that still holds true. The singles are undeniably catchy chart material but they still retain the ability to capture Glasgow life in the lyrics; On a Wages Day tells of how it feels like the world is your oyster when you get your pay packet; Real Gone Kid, apparently written about the American singer-songwriter Maria McKee, has a wonderfully ungrammatical line that always makes me smile; Love and Regret has a real Wet Wet Wet style ballad feel about it (all that’s missing is the Pellow grin); Fergus Sings the Blues is surprisingly upbeat nostalgic look back at singer Ricky Ross’ musical influences; and the country sounding Queen of the New Year, which opens the album, still sees me unashamedly singing the uh-ooo-ooh backing with Lorraine McIntosh while the pace increases as the song goes on, like all good New Year party songs should.

Of the non-single material on the album, Circus Lights is the single that never was, giving way eventually to Wages Day, and is much more guitar-focused than a lot of their songs. This Changing Light also has a harder edge to its intro to reflect the cynicism in the lyrics, looking at how things never quite turn out as planned. Sad Loved Girl is a complete change of pace, with a simple piano/bass backing to a melancholy ballad that will have you waving your lighters in the air. The World is Lit by Lightning is, by contrast, livelier and pretty forward looking with its funky 90s synth sound. Silhouette is a throwback to a simpler time and an easier on the ear sound that again makes great use of the bass. One Hundred Things, to be honest, is probably my least favourite track on the album, with its syncopated, almost reggae sound jarring somewhat with the rest of it. Your Constant Heart gets back to the oh so Scottish way of expressing genuine love without the needless hearts and flowers and the album rounds off with the strangely beautiful Orphans.

Deacon Blue, along with Danny Wilson, Big Country, Del Amitri, Simple Minds, Hue & Cry et al, created a blue collar “Scottish sound” in the pop charts in the late 1980s. Their work captured, as I’ve tried to say above, the melancholic nostalgia of what’s gone before coupled with a stoic acceptance of the present. Their music is not hope-filled but neither is it too depressed, there’s humour in the hardships and beauty in the mundane. And there’s a kind of camaraderie of commonality, a love of one’s country and of one’s fellow man that the Scots are not afraid to express in their music, because they really mean it.

And that ungrammatical line in Real Gone Kid? See if you spot it…