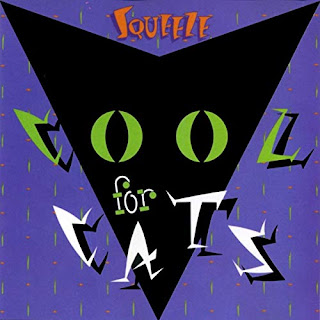 Inspired by our series of articles looking back at music released 30 years ago, Jimmy Hunter takes a step further back in time to give us a Song of the Day 1979. This week, he's looking very cool for cats...

A year ago this week (i.e. April 1978) this group scored its first single hit with Take Me I'm Yours and my ears picked up. A couple of flop singles later and this week's choice flew up the charts, peaking at nr.2 this week in 1979 and I loved everything about it. Most people will recognise the line "The Sweeney's doin' 90 cos they've got nowhere to go"- it's actually "cos they've got the word to go". This week the SotD79 choice is the delightful Cool For Cats by Squeeze.

Yes, the band that spawned Jools Holland and enabled all his Hogmanay Hootenannies was a very successful band before they went their separate ways. Far more successful than the commercial sales tell you. There's still a huge fan base for Squeeze (Glenn Tilbrook also, and both together) and I saw Chris Difford late last year performing a selection of songs at a small local venue in Dundee. Even though it was only a couple of guitars and a keyboard, it was a delight and the gig combined songs and stories about the songs and about the band at the time. I was quite a Squeeze fan but I was an even bigger fan of Difford's voice and his accent as he half sings, half speaks the lyrics.

There's the hook in the bass that goes all the way through, the high pitched backing vocals (cooooooool for caaaaaaats), and Difford's voice telling us a story. What story though? Well, according to Difford, quite a lot of it is autobiographical from when he was dossing on someone's floor - pre fame of course - and some of the characters he encountered at that time. During the gig Difford recounted many stories around this time and alluded to the fact that most of them he would never have spoken about then but are included in the song - all of which, for me, makes it more interesting.

So, here's an incredibly youthful looking Difford and the band on TOTP - note the way the girls are dressed: the title of the record is from a 1950s TV show called Cool For Cats and it was the first ever rock music TV programme on British TV. Apparently.