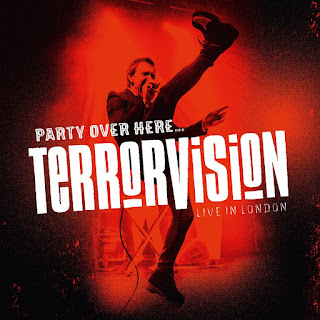 Steve Taylor-Bryant says there's a Party Over Here as he listens to Terrorvision's latest live album (with bonus Blu-ray!)...

Party Over Here, F*ck You Over There…

I have loved Terrorvision for what appears to be three decades, I’m not sure that figure can be right can it? Thirty odd years! I was lucky enough to catch them live back in the days of How to Make Friends, when both the band and I were younger men and, as well as being astute musicians, it was the energy you got from a Terrorvision live performance that stuck long in the memory. Fast forward far too many years and vocalist Tony Wright, guitarist Mark Yates, Bassist Leigh Marklew, keyboardist Milton Evans and drummer Cameron Greenwood, along with Nick Hughes on trumpet and Liz Mitchell on saxophone took a three band Britrock Must Be Destroyed project on the road with Terrorvision, The Wildhearts and Reef sharing headline roles throughout the tour. On the two occasions I was free to go I couldn’t get tickets and I was truly gutted. Fear not though as, when the tour hit the Hammersmith Apollo on the 6th of May 2018, Terrorvision took along a film crew and the result was a live album package released this week. Party Over Here: Terrorvision Live in London is a CD or Vinyl recording of the concert, and well put together booklet, and a Blu-Ray of the show. Sounds epic doesn’t it? I got it on the day of release for the price of just a Blu-Ray! They have released it cheaply because it is worth more money than I paid, I like to think it’s a reward to a loyal fanbase for sticking with them for all these years.

The band enter the stage to the children singing the Tequila chorus, to this day that still freaks me out, and when Wright has the audience nicely warmed up, we are off to the races with opening number Discotheque Wreck which is the perfect way to start what is going to be a show of great energy. Friends & Family is next, always a favourite, and then Alice What’s the Matter? An audience sing along delight. Didn’t Bleed Red, If I Was You see no let up in the energy being dispersed by band and audience alike. A quick break sees Wright introduce the band and then we are back at it with My House sang flawlessly by Wright and the audience. By this point in the show I am knackered just watching Wright own the stage like a dynamo, bouncing like a toddler on food colourings and sugar. 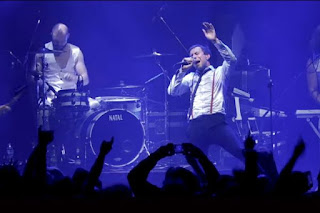 Some people say who gives a damn what they say…

Some People Say, a song I absolutely adore, slows the tempo and sees Wright asking for the audience to get out their phones that have an app that looks like a lighter and I must admit to chills when you see all those lights in such a beautifully tight venue. Some People Say is by far the highlight of a very strong first half of the concert. Enter the brass and Celebrity Hit List and we are back off at a relentless pace, where the fuck does Wright get all this energy? I get tired climbing the stairs! Perseverance keeps the energy going and sees both Wright and audience on form with verses that read more like tongue twisters than lyrics, the camera pans on a lit-up audience and there are hundreds of fans with smiles as big as the one I have just watching at home. Everyone is in love with Terrorvision. Babylon is a tom fuelled intro and its great to see the camera show Cameron quite often, he really is a fine drummer. Middleman sees Wright asking the audience to sing along and shows what a witty guy he is in the process, and with that audience participation it really is a Goosebumps moment. Demolition Song reminds me of being at a Stiff Little Fingers gig, marvellous, and Josephine is preceded by the band surprising Tony with a birthday cake and a balloon for his fiftieth, I am even more surprised at his energy levels now, he is older than me! Bastard. Anyway, Josephine full of energy and high standards despite the fact the band have been jumping about like nutters for quite a while now. D’ya Wanna Go Faster? Means we are nearing the end of the show so now like a Tasmanian Devil the band somehow find the energy to go up another level.

Was it the father or the son or the holy ghost?
The butler in the kitchen with the game show host
The policeman on the corner who’ll show you the way
The geezer with the beard who comes on Christmas day

Pretend Best Friend is an extraordinary song on record that I always thought would be impossible to pull off live, but here we are at the penultimate song of a concert of the highest quality and Wright et al are just killing it still, what a performance! You can’t really end a Terrorvision show on any track than Oblivion and when the band are in this mood and the audience are along for the ride there is no better performance of any song anywhere at any time. You should see the size of my smile right now, my face aches, this was just a remarkable gig from a band that are in tune with their entire fanbase and know how to entertain no matter the venue. Surely Bradford’s best export? Just sitting at home, driving in the car, this album will make you happy, it will make you sing out loud, prepare for Terrorvision to hold you in the palm of their hands.