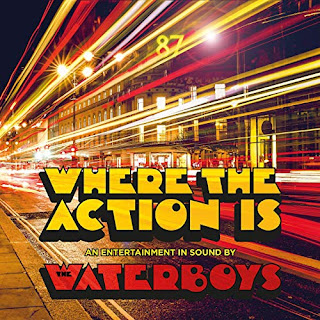 The Waterboys have released the video for "Where The Action Is," the title track and new single from their forthcoming album out next month via Cooking Vinyl...

"It began as a kind of mixtape album that I was going to put out almost privately," Waterboys founder and front man Mike Scott told Billboard. "After I finished the last record I had a number of instrumentals left over, and I started playing with those and putting vocals over them. Then a couple of them turned into actual songs and little by little what began as a mash-up mixtape record turned into a regular Waterboys record of serious songs."

The title for Where The Action Is was inspired by the chorus of Robert Parker’s 1960s mod / northern soul classic Let's Go Baby. The track’s update – with new lyrics by – is a cyclone of a song, all storming drums, skyscraping guitar solos played by Steve Wickham on his fuzzboxed-up violin, and wild soulful female vocals provided by the band’s fabulous Jess Kavanagh and Zeenie Summers and the video sees The Waterboys strut their stuff through the streets of Tokyo.

It's an exciting introduction to a 10-song, genre-defying album that is itself a testament to the enduring talents of Mike Scott and his band. One of the finest British songwriters of the past four decades, Scott's songs have been covered and/or recorded by artists including Prince, who crafted two different arrangements of the classic The Whole Of The Moon, Rod Stewart, Tom Jones, Steve Earle, and Ellie Goulding, who had a number three hit in 2013 with How Long Will I Love You.

Diverse in breadth, Where The Action Is is an album of incredible songwriting, experimentation and musical brilliance and is out on 24th May.


Tracklist:
1. Where The Action Is
2. London Mick
3. Out Of All This Blue
4. Right Side Of Heartbreak (Wrong Side Of Love)
5. In My Time On Earth
6. Ladbroke Grove Symphony
7. Take Me There I Will Follow You
8. And There’s Love
9. Then She Made The Lasses-O
10. Piper At The Gates Of Dawn

Where The Action Is will be available on CD, Deluxe 2xCD, LP, digital download and streaming services with exclusive bundles also available from the Official Store.