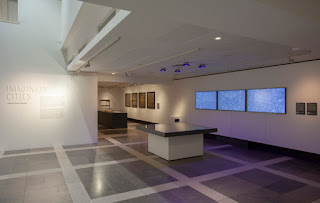 Staged in the Library’s Entrance Hall gallery until 14th July, Imaginary Cities is a free exhibition exploring the creative potential of archives and collections in the Digital Age. 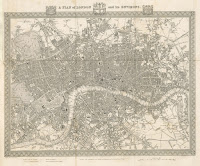 The installations are a creative response to four 19th-century maps of London, Paris, New York and Chicago from a collection of 50,000 images found within the British Library’s One Million Images from Scanned Books collection, which is available on Flickr Commons. They reflect upon the hybrid nature of archives in the twenty-first century through a combination of digital technologies and traditional fine art processes. Algorithmically generated imagery and virtual reality environments are used alongside precious metal gilding and historical woodworking techniques to create four fantastical cityscapes for the Information Age, which will be displayed alongside the original source maps from printed books contained within the British Library’s archives. 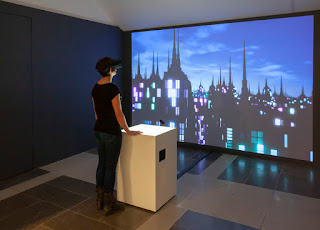 The exhibition will include a virtual reality cityscape based on New York City which is generated anew each day to reflect the live, ever-changing visitor data – including page views, interactions and volunteer image tagging – of the historical map on Flickr Commons. The piece visually highlights how the British Library collections are a living entity, sparking new and unexpected creativity.

Artist Michael Takeo Magruder, said “As I delved into the archive of one million images, searching for precious moments and unknown fragments within the vast digital collection, I began to think about how I could use not only the image data to generate objects and experiences, but also the metadata like view counts, favourites and tags. When an archive becomes digital and is opened to the world it becomes a ‘living’ structure that is constantly changing as people connect to it, use it, and leave traces of themselves. This, from an artistic standpoint, became most interesting to me. And so, I set out to create artworks that would capture and embody this essence; creations designed by me and my collaborators, but ultimately dictated by the choices of passers-by whom we would never know or meet.” 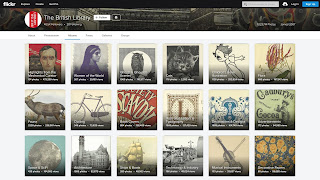 Imaginary Cities was developed in collaboration with British Library Labs, an Andrew W. Mellon Foundation and British Library funded project that inspires and facilitates use of the Library’s digital collections and data in exciting, innovative new ways. Since the One Million Images from Scanned Books collection was released into the public domain five years ago, it has received over one billion views and sparked a wealth of creative responses. Imaginary Cities perfectly showcases how open and free access to the British Library’s images has stimulated creativity and led to the development of inventive, born-digital and analogue cultural outputs designed for 21st-century audiences.

Mahendra Mahey, manager of British Library Labs, added “The British Library has been a sector leader in releasing images from cultural collections into the public domain to be used freely. Since we uploaded one million images to Flickr Commons in 2013, the wildly inventive ways they’ve been used by people from all around the world has astounded us: we’ve seen the development of new artificial intelligence research, image tagging software and video games to educational initiatives, commercial products and artworks which have been exhibited all over the world. We’re delighted to celebrate the creativity that has been unleashed by our Flickr Commons collection through Imaginary Cities, an exhibition which perfectly encapsulates what BL Labs is all about.”

To mark the opening, the British Library will host a talk by the artist and his collaborators, followed by an Algorave, which will see the Library transformed in a futuristic late-night coding event in collaboration with The Alan Turing Institute. Imaginary Cities is generously supported by The Eccles Centre for American Studies at the British Library.