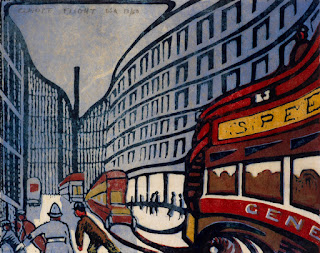 This Summer, Dulwich Picture Gallery will shine a spotlight on a brief but intense period of dynamic printmaking during the interwar period, with the first major show of work by artists from the Grosvenor School of Modern Art...

Celebrating 90 years since the inaugural exhibition on British linocuts at the Redfern Gallery in London, Cutting Edge: Modernist British Printmaking will bring together 120 prints, drawings and posters to highlight a radical movement that incorporated metropolitan and rural life, men and women, as well as British and international students. It will reveal the unified commitment by the artists of the Grosvenor School to champion and progress the medium of linocut printmaking with key works by the influential teacher and artist, Claude Flight, and nine of his leading students including Cyril Power, Sybil Andrews, Lill Tschudi, William Greengrass and Leonard Beaumont. A number of loans will be displayed publicly for the first time and several international loans will receive their first major UK showing, including prints by the Australian students Dorrit Black, Ethel Spowers and Eveline Syme. 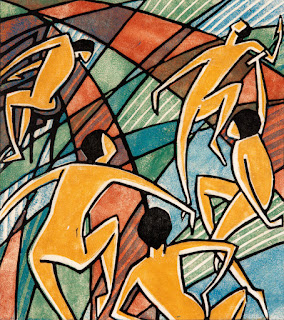 Founded by the Scottish wood engraver Iain Macnab in Pimlico, London in 1925, the Grosvenor School became a leading force in the production of modern printmaking between the wars. The group became renowned for their iconic, vibrant prints that championed the energy of contemporary life - translating ordinary, everyday scenes into modernist compositions. Arranged thematically, the exhibition will highlight key series of works and focus on the components that made up their energetic and rhythmic visual imagery. From commuter experiences of public transport, to mass spectatorship at sporting events and scenes of working life, the artists sought subjects that would be instantly recognisable and reflect Flight’s ideas that linocuts should be ‘an art of the people for their homes’. 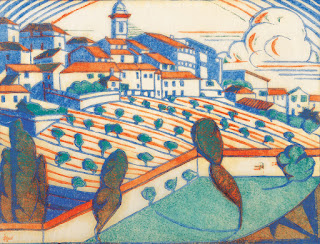 The exhibition will begin by contextualising the artistic influences on Flight and his students. Reflecting upon the avant-garde values of Futurism, Vorticism and Cubism, a selection of woodcuts and lithographs by Paul Nash, David Bomberg, and Christopher Nevinson will be displayed, including Nash’s Void of War (1918) and Nevinson’s The Bomber (1918). Having studied alongside Nevinson, Flight was fully exposed to these trends and adopted the essential characteristics of speed and the dynamism of urban life in his own work and teachings.

The exhibition will go on to highlight the central themes explored by students of the Grosvenor School, revealing the power of linocut to transform every day subjects into dynamic works of art. A room dedicated to work and play will include Power’s portrayal of thrills in The Merry-Go-Round (c.1930), and the fairground thrills of ‘Appy ‘Ampstead(1933), as well as Tschudi’s scenes of working life in Sticking Up Posters (1933) and Fixing the Wires (1932).

A later room will explore the subject of sport, which was wholly embraced by the artists who produced some of the most well-known images of contemporary British sporting culture in a new medium devoid of historical precedence. This section will include prints by Flight, Andrews and Power that depict mass spectatorship as well as the speed of sport itself in works such as Andrew’s Speedway (1934). 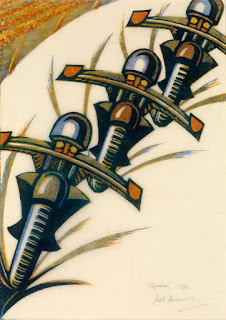 The exhibition culminates with two rooms dedicated to London and transport, bringing together the original tube posters designed by Power and Andrews (working under the composite signature of Andrew-Power) for Frank Pick, the Managing Director of London Underground in the 1920s and ‘30s. All eight prints will be displayed together and will show how leisure and sporting activities were reached via the London Transport network.

Dulwich Picture Gallery will also bring together proofs and sketches for works including Power’s The Tube Station (1932), on loan from Miami, and will examine materials and technique. The exhibition will include original tools and studies showing how the School revolutionised the process, as well as rarely seen sketchbooks from the Power estate and family photographs of the artists.

The exhibition is guest curated by Gordon Samuel, one of London’s leading specialists in Modern British painting. Speaking of the exhibition he said, “I have been exhibiting the Grosvenor School linocuts for the past 35 years at exhibitions and art fairs at home and abroad and they never fail to attract an appreciative audience. What will strike visitors are the vivid colours and the Modernity of the work – amazing to think that these were made over 90 years ago and remain just as compelling today as back in the 1930s!”

Jennifer Scott, The Sackler Director of Dulwich Picture Gallery, added “With instantly recognisable and relatable themes, the rhythms of daily life represented in these artworks created nearly 100 years ago still feel immensely poignant today. There has never been a better time to bring together such important reminders of the essential links between life and art.” 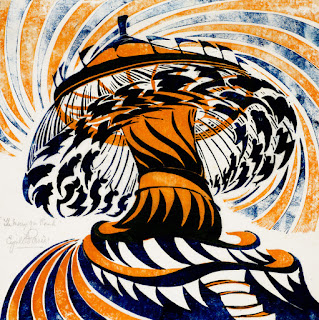 A full colour catalogue will accompany the exhibition. Lenders include The Art Gallery of South Australia, Adelaide; The Hunterian Museum, Glasgow; The London Transport Museum; Osborne Samuel Gallery, London and The Wolfsonian, Miami, as well as a number of private collectors.

The exhibition runs from 19th June - 8th September, find out more at https://www.dulwichpicturegallery.org.uk