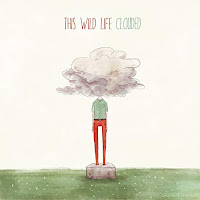 In an effort to further her musical education, Susan Omand has been set "homework" of listening to albums released after the 1980s that she has missed out on. This week her judgement seems Clouded by This Wild Life ...

I stuck on my next Educating Omand homework album at the start of last week and it surprised me. Poppy acousticy singer/songwritery styley noise is about the last thing I expected to get on this year’s list (apart from Damien Rice but I kinda knew that was coming) and yet here we are. Again.

This Wild Life is a band I know nothing about so, as the surprise wore off and the first song played in my headphones, I did a bit of research. Apparently, they are a “Californian acoustic rock duo” that have been on the go for almost 10 years in various guises… including a pop punk band?! Yeah, no. I’m having enough problem thinking of these guys as “rock”, never mind anything even vaguely punk. I can understand why they moved away from all that though, because the singer Kevin Jordan’s voice isn’t strong enough for anything more than an acoustic accompaniment.

Talking of vocals, minor rant incoming… what is it with so many male pop singers these days feel the need to sing in a much higher register than one would imagine possible without incredibly tight trousers? Seriously though, a high-pitched male voice used to be the exception in pop music rather than the rule and, although fantastic in tiny little quantities and by the right singer (i.e really only that one guy from The Darkness), it’s really not something anyone should aspire to in my opinion. I mean my own singing voice is generally lower than his is! And going back to what I said earlier about his voice not being strong, it also sounds like it’s not trained in any way so it’s very breathy as well as very soft. This is a problem with a lot of pop singers these days and singing from the throat rather than the diaphragm, especially with such a high natural register, means there will be strained vocal cord problems later in life. It’s this same breathy, scratchy, forced nature of singing that puts me off a lot of female singers and it looks like I am going to have to start putting up with it more in all areas of music as it invades the charts.

Anyway, what of the album itself? It’s ok. That’s kind of it. It’s ok. It’s background. I’ve listened to it a few times now and I’m struggling to see what’s so special about it – there’s nothing innovative or interesting in the music, it sounds like it would fit in to the Axis of Awesome’s Four Chord Song without any difficulty at all. I’m not the biggest fan of the Ed Sheeran-esque singer/songwriter/one-boy-and-his-guitar thing anyway (probably because I don’t listen to lyrics very often – the voice is another instrument for me on very many occasions) so a lot of the nuance is likely lost on me too. Don’t get me wrong, it’s not a bad listen, far from it, it’s inoffensive and bimbles on at a level such that I can almost tune it out because each song runs into the next without attracting any attention to itself.

My favourite song on the album, since I have to pick one, has to be No More Bad Days though because, for once, I (probably accidentally) heard one line in the lyrics and with a hook like “I thought we hit rock bottom and then the floor gave out,” I thought this is my level of cynicism so I went back and listened to the rest yet again. I even went as far as finding all the separate song lyrics written out so I could read them (Honestly, how do people manage without lyric booklets these days?) Nope. There’s just that one. So listen to that one for that one line and to give you an idea of the rest of the album. Sorry David, not educated this time. Again.

Addendum: It was only when I went looking for the song to share on Youtube that I saw this picture of them. Oh boy, they REALLY don’t sound like they look!!