Turn That Noise Down - Julian Lennon 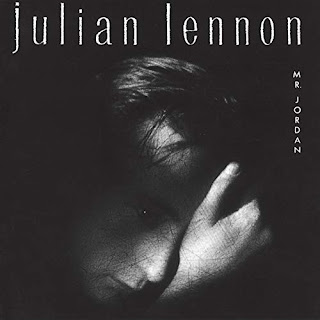 So many well-known albums turn 30 this year and Steve Taylor-Bryant and Susan Omand travel back to 1989 to revisit some of the sounds of their youth that made parents shout "Turn that noise down!" This week, Steve gets introduced to Mr Jordan...

I obviously know who Julian Lennon is and I’m not embarrassed to tell you that Saltwater is near the top of my favourite all time songs list. But, that’s the only Julian Lennon song I knew before I sat down with a copy of Mr. Jordan and honestly I was expecting 80’s ballad on top of 80’s ballad but after listening to the opening track, titled Now You’re in Heaven which looks like a ballad title if ever there was one, I had a “holy fuck” moment and to instantly replay it. Pounding loud drums, heavy cymbals, distorted electric guitars, rocky bass and then layers upon layers of keyboards and sound effects added to an unrecognisable Lennon on vocals and I was thinking it’s just a notch below a Marilyn Manson tune. It’s honestly the most unexpected beginning to an album I think I’ve ever heard. It’s not Marilyn Manson, it’s Tin Machine! Julian Lennon is channelling Tin Machine! I’m so happy I could weep. Can I stop the review now? The album isn’t going to beat its opening track is it?

You’re the One is up next and is ballad tempo but full of guitars and drums still, what the fuck is going on? I’m loving this! *checks production notes - produced by Pat Leonard of Pink Floyd and Ted Nugent production credits. This explains it. This isn’t a Julian Lennon album this Pat Leonard and Julian Lennon trying to do something left field and not expected. I bet 30 years ago this album was ridiculed, but I absolutely am in love! Next is I Get Up which continues to impress the side of me that lives for expectations being dashed, I Get Up is what Elvis would have done if he didn’t die. It’s phenomenal but only if you like weirdness.

Mother Mary is a little more familiar to me in Lennon’s vocal sound and is perhaps more a little generic 80’s rock sound. That’s a shame. I mean it’s not a bad track by any means but after the three opening tracks I kind of wanted the insanity to continue. Angilette is Lennon, but not Julian, Angilette is something I would imagine (see what I did there?) his father releasing. Gave me goosebumps if I’m honest, what a fascinating sound. Open Your Eyes has a very 80’s sound to it, kind of song you’d expect to find on a Beverly Hills Cop soundtrack, for about 30 seconds until it turns into a Bowie record for a moment, then back again, then Bowie. My word that was a weird trip! More of that please!

Make it Up to You is Julian Lennon does the blues and I quite like it. Sunday Morning with its chattering birds and church bells intro leads nicely into a folk song? A Beatles song? A children’s nursery rhyme? I don’t know what the hell it is but by the time the brass starts I’m hooked. Second Time is actually the first weak song I’ve found on the album. It’s not particularly inspiring vocally or musically and in an album of impressive yet weird... wait what was that? Just before the chorus? Yep, 7 seconds of nuttiness before the boredom comes back. Even in the worst song on Mr. Jordan there’s much experimenting to admire. I Want You to Know closes out the album and is the perfect bookend as it’s pretty much the opening track with a funkier sounding bass line. On certain copies of Mr. Jordan there’s also a cover of Johnny B. Goode but, after hearing Julian Lennon take on everyone’s Bowie, my Tin Machine Bowie, an 80’s version of Elvis, and his dad in multiple time periods I don’t have the energy to hear him take on Chuck Berry as well.

I’ll be honest this album is probably a steaming pile of dog excrement to any of you but, to me, who had EVERY expectation exceeded, who loves Tin Machine, who wants almost heavy metal John Lennon to be a thing, I can hand on my heart tell you that this is the best record I’ve listened to in a long time. It’s beyond experimental and borders on “someone get him some help” but I appreciate every note played, every vocal change, every goddamn drum beat. Batshit crazy in the best possible way.

Extra track - I listened to the Johnny B. Goode bonus track. OH. MY. WORD! It’s insane. Love it.