Turn That Noise Down - Extreme 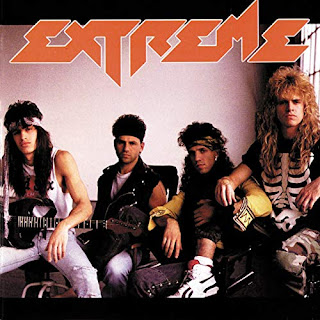 So many well-known albums turn 30 this year and Steve Taylor-Bryant and Susan Omand travel back to 1989 to revisit some of the sounds of their youth that made parents shout "Turn that noise down!" This week, Susan got the funk out with Extreme...

Like, well, probably everyone, I started listening to Extreme with their 1990 Pornograffiti album and stopped again with 1992’s III Sides to Every Story. So, when I saw their self-titled debut album on the list for albums that turn 30 this year, I took the chance to go back to the one I missed out on.

And it’s a surprisingly good album. Nothing groundbreaking but definitely listenable and a strong debut for the Boston-based funk-metal band. Little Girls, which opens the album, has a blues-y edge with a cracking harmonica, Wind Me Up is very Rush-concepty sounding, Kid Ego ramps up the hair metal to sound like Bon Jovi and Watching Waiting is a “wave your lighters in the air” ballad with a hooky anthemic chorus. The intro of Mutha, apart from the annoying crying kid, is an amazing exercise in Bettencourt’s guitar over-indulgence, but beautifully done, and then it drops down to thump along as pretty much 1970s glam; clean, melodic, harmonic and very singable. Teacher’s Pet ups the percussion to Aerosmith levels and Big Boys Don’t Cry showcases the power of lead singer Gary Cherone’s vocal. He reminded me a lot of Diamond Dave (David Lee Roth) here and, in my book, that’s a huge compliment. More guitar picking starts Smoke Signals and it's this track, more than any other track on the album for me, highlights the syncopated funk that the band became known for, which continues in Flesh n Blood, even daring to add in a bit of slap bass that Mark King would have been proud of. Rock a Bye Bye is indeed lullaby-like at the start, complete with violins and piano, and uses lyrics from the nursery rhyme before the epic and thunderous guitar solo kicks in. The final track on the album, though, is the only one that I actually recognised from back in the day, and that was as part of the Bill and Ted soundtrack, with Do You Want To Play.

In fact, I didn’t put it together in my head until this point that all the tracks on this album were childhood related. That would explain the annoying kids voices I kept hearing throughout several of the songs but if this theme choice was intentional because it was their debut album or for some other reason I don’t know. What I do know though is that this is a solid start for a band whose music I would drift away from in a few years’ time. Whether that drift is maybe my oversight more than their music changing too much, remains to be seen. I may have to revisit some of their later albums to find out.