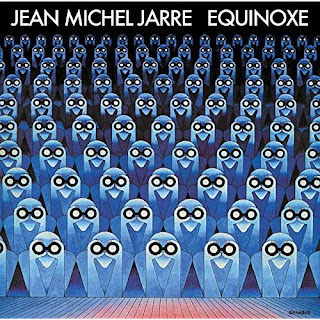 Inspired by our 1989 Turn That Noise Down (TTND) articles, Jimmy Hunter takes a look ten years further back to the music of 1979. This time, it's a Jarre of marmite as he looks back at Jean-Michel Jarre's album Equinoxe...

I was trying to decide which one out of two albums I've been listening to this week to review for TTND79 and I couldn't decide. So, I've listened to both and the one that, as the young folk say these days, "gives me the feels" more than the other (currently, they go back and forth) is Jean-Michel Jarre's Equinoxe.

Within the first minute of the first track, Equinoxe Part I, my skin is covered in goosebumps and I'm transported off our precarious little planet into a part of my imagination that first stirred when I first started listening to electronic music like this. Not the electronics of prog rock, a genre I also love, but much like scat and wild jazz, it's a kind of creativity that's beyond my ken, yet one I admire greatly.

The joyous start of track 1 of this album, with its almost overture feeling, soon becomes hesitation and wonder in Equinoxe Part II. It's quiet and almost has the feel of a thriller movie. I still think / expect something to happen when I listen to this track and obviously nothing ever does and I always feel a little let down by it.

Equinoxe Part III takes our journey into the stars (or at least mine at any rate) a little further, it has more substance, a little more light and shade. This track is 4 minutes of gradually building up to Part IV and I love the way it happens. Here we have more layers, more melody and for goodness sake, an actual rhythm. Increasing in length, the track builds in the way I love an electronic instrumental to do (don't care how crap that sounds).

After decades of listening to this genre, think of Vangelis, Mike Oldfield, early experimental Patrick Cowley tracks, the album tracks really have to flow one into the other in order to work best. To tell a story. Part IV ends almost like a question mark. Moving into Equinoxe Part V we're in territory we know - it became a single - it has a hook but it doesn't stand out from the others. We're going somewhere.

Into Part VI and it's still pulsing and carrying us along and into Part VII where we have a reprisal of earlier melodies and sounds. The rhythm is still there and I always have the feeling of moving fast through open air when I listen to this. It's the longest track on the album but it doesn't feel like it - and towards then end begins to slow and dissipate.

The last part starts with a thunder clap and I should like this track more but I just don't like the start. I never have. It sounds like some sort of misplaced French sounding merry-go-round music that irritates me slightly. then, to the thunder and rain, it fades out and we're back to a reprisal of earlier tracks with a very different arrangement but I really enjoy this. Perhaps I feel this way because the first part is like off-milk to me.

With age - both mine and the album's - the feeling is the same but has moved from wonder at the sound to reflection and I like how that's happened. It's not an album I listen to often but it is one I've loved for 40 years. This genre is like marmite to most people but I urge you to give it a go - I like it more than a lot of Jarre's other work, especially his later work which I always found to be, well, too big and rather arrogant.