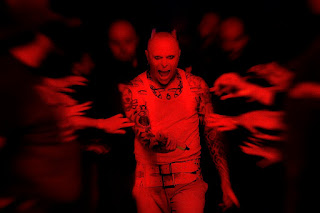 Susan Omand reflects on the impact of Keith Flint...

I’m crying tears of real sadness over the death of someone that I didn’t know but who always scared the shit out of me.

When Keith Flint’s death was announced yesterday, I really couldn’t believe what I was reading. I’d been following his career basically forever, because I’ve listened to The Prodigy since way back in the early 90s when Flint was just a dancer with the band and they released Charly, a trend-setting rave anthem that sampled the public service information films of the boy and his cat, Charley Says. And they stayed in the periphery of my listening as the band grew into its techno roots with albums like Music for the Jilted Generation. But it wasn’t until 1996, with a complete change of style, and the positioning of dancer Flint as lead vocalist, that the band really came to the forefront of my attention and my record collection.

It was in 1996 that I first saw the video for Firestarter.

I remember the feeling clearly. It was sickness and disorientation. It was shock and awe of the highest magnitude. It physically knocked the breath from me and it rocked me back in my seat. The utter ferocity and menace of this spiky haired lunatic punk with insane black eyes and an oversize jumper lunging at me out of the screen completely terrified me! And yet I was totally fascinated by him, I couldn’t look away – it was like watching a violent car crash in slow motion; beautiful, balletic, ballistic. And the music, oh my god the music. There was something tribal, visceral about Firestarter. That percussion, that voice, just heightened the tension and intensity that was echoed in the video, triggering a fight or flight sensation, leaving me feeling like I’d disturbed a vicious, caged beast. It was truly stunning.

When the album, Fat of the Land, came out in 1997, I devoured it. I played it constantly. I adored every note, every beat. With songs like the industrial Diesel Power, the woozily wonderful Climbatize and the more ambient X-Files-y Narayan standing up just as well as the singles, Firestarter, Breathe and Smack My Bitch Up, there’s not a weak track on it. I knew then, as I know now, this was my favourite ever album and acts as my benchmark for, well, everything really.

My love for the band continued, and continues, to this day. Just a few months ago I reviewed their latest album No Tourists for this site, saying that “if you loved the sound of their early stuff with a little bit more beef in the backing, this is a great fun album to listen to” and that’s true but, for me, nothing will ever, EVER, top that first fear-filled Firestarter experience.

Keith Flint, you superbly scary human being, you will be missed.