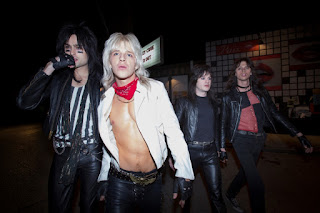 "Their music made them famous, their lives made them infamous" says the tagline. Steve Taylor-Bryant dug into Mötley Crüe biopic The Dirt, available now on Netflix...

I have been a fan of Mötley Crüe for as long as I can remember so when Netflix announced they were making The Dirt I got very nervous. I have read the book the film was to be based on, written by the band with Neil Strauss, and I found that, underneath all the inevitable party and debauchery stories, there was some real depth and humanity which led me to go from just liking the band to actually respecting them and seeing past the media portrayal of them all. But Netflix announced that Jeff Tremaine was to be at the helm and I became guilty of judging a film by its director. I do not enjoy things like Jackass and Bad Grandpa and so sat to watch The Dirt expecting a long party movie glamorising drink and drugs. I was almost wrong, but partly right, and The Dirt is most definitely a film of two acts.

The first act shows Nikki Sixx (Douglas Booth – The Riot Club), Frank Carlton Serafino Jr. as he was then, the victim of an abusive childhood. Father leaves, drunk mother shows no care for child, a string of surrogate fathers beat child, that scenario continuing until one day Frank has his mother arrested and quits his old life, moving to Los Angeles, changing his name legally to Nikki Sixx who doesn’t like the band he is in. Fan of his band is drummer Tommy Lee (Colson Baker a.k.a. Machine Gun Kelly) who befriends Sixx and they decide to form a new group. A string of auditions brings them in contact with Mick Mars (Iwan Rheon – Game of Thrones), a slightly older guy who has chronic ankylosing spondylitis that affects his spine and pelvis leaving him in near constant pain, who is disillusioned with the music scene he is part of and wants a serious shot at stardom. Tommy suggest his old high school pal Vince Neil (Daniel Webber – 11.22.63) as singer and so starts the rise to fame. The film then pretty much becomes a montage of parties, soft porn scenes, and concert footage until you think you are watching Jackass. But then the film takes a dark twist and the writing becomes more what you would want from a film and the serious aspects of the life of Mötley Crüe take centre stage. 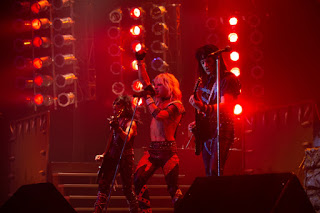 Vince Neil crashing his sports car whilst drunk leading to the death of Hanoi Rocks drummer Razzle (Max Milner – The Voice semi finalist 2012) starts a period of real darkness for both the band and the viewer. Nikki’s descent into heroin addiction and subsequent death from overdose to be brought back in the ambulance to go and shoot up again leads the entire band to rehab and a hit album with Dr. Feelgood but sobriety is wrecking their friendship and eventually Neil quits/is fired. The band continue with the ill appointed John Corabi which leads to bad shows and record company dissatisfaction. Neil suffers another personal tragedy with the death from cancer of his daughter Skylar, and Tommy’s dream marriage to Heather Locklear falls apart from infidelity caught on camera by a tabloid magazine. Nikki manages to wrestle back ownership of Mötley Crüe’s songs from the record label and, after his journey into forgiveness begins, the band reconcile with Neil and go on to have another twenty odd years of relative success.

I thoroughly enjoyed the second act of The Dirt and the four main cast members cover themselves in glory with top notch performances of four rock stars that prove to be fallible human beings. The second half of The Dirt is certainly more familiar with my experience from reading the book. Tremaine does a stunning job of tying a rich history together with dialogue filled scenes and imagery especially after Dr. Feelgood when the band are struggling with the dynamic shift in rock music summed up perfectly by a lingering shot of Pearl Jam’s Ten album cover on a wall outside their studio. Which leads us back to the first act of the film, which is not great. However, Tremaine is perfectly suited as a director there too, due to the first act basically being a drug fuelled Jackass episode set to music. It was important to show the debauched hedonism and stupidity and rock star life that Mötley Crüe led as it was essential to the humanity that starts the second act and I am not sure any other director would have made me roar with laughter whilst at the same time being completely disgusted more than Tremaine did. The unfortunate thing about the Mötley Crüe story is that the first half of their tale has zero depth and the last part is very truthful and human and so whoever oversaw capturing that was on a hiding to nothing.

The Dirt is a very bad soft porn comedy for the first 45 minutes or so with an excellent soundtrack that moves into a very good biopic when there are depths to be explored. The cast are stunning in their portrayals with particular nods of appreciation to Douglas Booth who could have gone in a completely different direction with Sixx but played the addiction angle with truth and grace. If you love Mötley Crüe then The Dirt is a joyful way to spend a couple of hours, if you know nothing of the band but like a biopic then still give it a go. However, if you are my mother, maybe press play at about minute 46 the beginning is not for you.