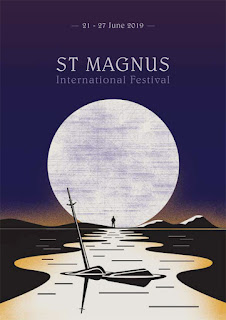 The full programme has been announced for this year's St Magnus International Festival which takes place from Friday 21st to Thursday 27th June...

The magical atmosphere of Orkney at midsummer, its ancient landscape and unique performance settings blend together to create a very special experience for audiences. Performances take place across the Orkney Islands, in venues as diverse as a tall ship, outdoor gardens, a sports centre and the great medieval cathedral of St Magnus in Kirkwall.

St Magnus International Festival Director, Alasdair Nicolson says, “I’m lucky to have the backdrop of Orkney upon which to present so many wonderful artists, performances and programmes. The range of events has always been diverse representing the best artists from the UK and across the world, and this year is no exception.”

2019 sees the commemoration of the Scuttling of the German Fleet in Scapa Flow where it had been interned following the end of the war. Stromness Museum will be producing a locally- made drama called The Day the Fleet went down which tells the story of young Orkney children who were on a boat trip to see the battle cruisers as the boats began to sink. Other works in programmes reflect another theme of the Festival – peace and reconciliation.

The 43rd Festival sees the welcome return of the BBC Scottish Symphony Orchestra with a three-concert residency at the centre of which is a large-scale concert with the Festival’s own Chorus under the baton of the young conductor Ben Gernon.

The young cellist Jamal Aliyev joins the orchestra for a performance one hundred years since its premiere of the Elgar Cello Concerto. The other concerts feature the strings of the orchestra who are joined by the British soprano Mary Bevan and the Wind, Brass and Percussion who bring an explosive concert culminating in Handel’s Fireworks Music.

The new orchestra based in Govan, Glasgow the Glasgow Barons makes its debut at the Festival with a concert including Festival Director Alasdair Nicolson’s new Trumpet Concerto.

The Festival marks the ever-present historic links with Scandinavia bringing professional choirs from Norway, Finland, Sweden and Denmark for the only UK date of the Nordic Choral Expedition. 86 singers from the Norwegian Soloists Choir, the Helsinki Chamber Choir, Ars Nova Copenhagen and the Eric Ericson Choir will arrive on the islands to perform a wide range of music old, nearly new and brand new in four concerts.

The chamber music programme is filled with diversity in 2019 and is led by the residence of the award-winning young Scottish string quartet the Maxwell Quartet presenting three concerts with repertoire ranging from Beethoven’s Grosse Fugue to Scots and Norwegian folk music. Dinara Klinton from Ukraine and Anna Szałucka from Poland perform diverse programmes of piano music and cellist Jamal Aliyev is joined by another award-winning pianist Can Çakmur as part of the Festival lunchtime series.

Organist of the Tower of London Christian Wilson performs a meditative late-night concert on the mighty organ of St Magnus Cathedral and the Kapten Piano Trio, and the Kaleidoscope Saxophone Quartet take music out to the smaller islands of Hoy and Rousay.

The Statsraad Lehmkuhl pays a visit to the Festival again this year with an on-deck performance by the Kaleidoscope Saxophone Quartet.

The theme of peace and reconciliation is investigated in a lecture by Terry Waite and music, art and theatre installations in some gardens – Happy Valley, Woodwick House and Papdale Walled Garden - across the mainland of Orkney.

Literature is represented with Festival poet Robin Robertson who reads both his poetry and his new verse novel The Long Take. Older poetry from the Viking period The Song Weigher is performed in his own translations by poet Ian Crockatt.

MAGFEST brings a host of fringe activity to the Festival with the newly commissioned Writer’s Block from local fiddler/composer Eric Linklater, the award-winning comedy of Garry Starr Performs Everything and the South American puppet theatre of Theatre Cusan. The Festival Club in Orkney’s newest venue puts music from well-known and emerging traditional music performers on stage nightly during the Festival.

Find out more and how to book tickets at https://www.stmagnusfestival.com/