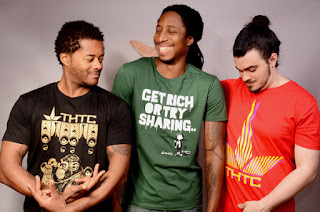 The South West's hip hop heroes The Scribes have released the video for their new track Righteous, featuring Leon Rhymes of Too Many T’s...

The Scribes, consisting of lyricist/multi instrumentalist Ill Literate, rapper Jonny Steele and beatbox maestro Lacey, describe themselves as "a multi award winning hip hop three piece whose unique blend of beatboxing, off the cuff freestyling and genre-spanning music has created a live show quite unlike any other on the scene today, with appeal ranging far beyond traditional hip hop fare" and, if their new video is anything to go by, they're living up to the hype.

The track’s production is a "homage to Golden Age hip hop with rumbling subs, booming breaks and choppy vocal cuts and stabs providing a classic backdrop for the lyricist’s intricate wordplay and flawless flows."

Directed and edited by Chris Lucas of Arun Productions and filmed over two days around the City of Bristol, the video features the group portraying various roles of Righteousness; A shamanic medicine man wandering the woods and healing the infirm, a door-to-door preacher sharing the gospel of hip hop, a voodoo witch doctor exorcising demons, and a vicar presiding over a wedding ceremony with an unusual amount of swagger.

Sponsored by ethical clothing company THTC, the video is a vibrant and bouncy visual that perfectly complements The Scribes’ music, and is perhaps a sign of bigger things to come.


Righteous, produced by Oxford based beatsmith Astro Snare, is taken from The Scribes’ forthcoming 12 track LP Quill Equipped Villainy that also features Akil The MC from the legendary Jurassic 5, Bodega Brovaz, Blacksmith and many more.

You can buy the single of Righteous here

Find out more about The Scribes online at