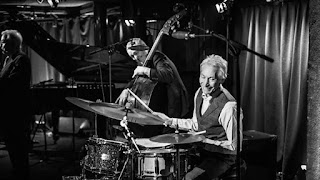 In the first live BBC black and white TV programme since the 1970s, BBC Four revives the iconic 1960s BBC show Jazz 625 for one night only on Friday 3rd May...

Charlie Watts said "That’s one of the nice things about Jazz 625, they had all the best guys on there… In those days, they had real stars and distinctive players. That was one of things I loved about those guys, they just looked so great when they played."

Jazz 625 broadcast from 1964 to 1966 and featured classic performances from the likes of Duke Ellington, Thelonious Monk, Dizzy Gillespie, Ronnie Scott and Cleo Laine. This one-night revival will feature selections from the archive and the house band, with guests paying tribute to those who performed in the original series and includes a new interview with Dame Cleo Laine reflecting on her performance on a classic edition of Jazz 625.

Presented by Andi Oliver the programme will also include interviews and features with some of those who appeared and worked on the original Jazz 625 as well as those who have been influenced by the series and the vintage jazz era it captured.

Jazz 625 Live: For One Night Only will be broadcast live on BBC Four at 9pm on Friday 3 May and there will be comprehensive coverage of Cheltenham Jazz Festival on BBC Radio 2 and BBC Radio 6 Music

Andi Oliver, said “I am absolutely delighted to be presenting this revival of Jazz 625. It is such an iconic programme that captured performances from all of the greats of 1960’s jazz and I am somewhat thrilled to be able to say that we have a host of today’s biggest stars onboard to pay tribute. I truly cannot wait!”

Cassian Harrison, Channel Editor, BBC Four, added “As the home of music on television, I’m incredibly proud that BBC Four is celebrating one of the most legendary of music shows. Jazz 625: For One Night Only promises to be a terrific night of the very best of classic Jazz from the world’s leading contemporary performers.”

Meanwhile on BBC Radio 2, Jo Whiley will broadcast from Cheltenham Jazz Festival on Thursday 2 May between 8-10pm, featuring a live concert from James Morrison from 8.30pm. For one night, The Country Show with Bob Harris will be broadcast from 7-8pm. On Friday 3 May, John Sessions will present Friday Night is Music Night: The Song Of Soho - a celebration of London's Soho. The programme will feature guest singers Georgie Fame, who sang the number one hits Yeh Yeh, Get Away and The Ballad Of Bonnie And Clyde in the 1960s; Strictly Come Dancing vocalist Tommy Blaize; and current lead singer of Incognito, Vanessa Haynes. All singers will be accompanied by Guy Barker and the BBC Concert Orchestra. On Sunday 5 May at 9pm, Andi Oliver will introduce musical highlights from Friday night's special one night revival on BBC Four of Jazz 625 and will tell the story of this iconic 1960’s Jazz TV show. Amongst those appearing are Gregory Porter, Joshua Redman, Jacqui Dankworth and Rolling Stone's drummer Charlie Watts showing off his jazz chops. Jo Whiley is produced by Anna Richards for Radio 2, Friday Night is Music Night: The Song of Soho is produced by Anthony Cherry for Radio 2 and Jazz 625 is produced by Jez Nelson for Somethin’ Else.

Lewis Carnie, Head of Radio 2, said “Jazz is hugely popular with our listeners, so I’m delighted that Radio 2 will once again be broadcasting from the Cheltenham Jazz Festival, celebrating the genre with special programmes across that weekend and bringing fans even more of the music they love.”

On BBC Radio 6 Music, Gilles Peterson and Cerys Matthews will be presenting their weekly shows from Cheltenham Jazz Festival. Gilles will be on Saturday, 3-6pm (produced by Jesse Howard for Somethin’ Else) and Cerys on Sunday, 10am-1pm (produced by Angela Davies for the BBC).

Jazz 625 Live: For One Night Only is a Somethin’ Else production for BBC Four. The Executive Producer is Jez Nelson. It was commissioned by Cassian Harrison, Channel Editor, BBC Four and Jan Younghusband, Head of TV Commissioning for BBC Music. Owen Courtney is the Commissioning Editor.