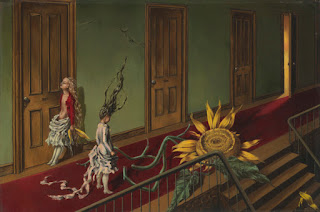 On now until 9th June, Tate Modern has unveiled a major exhibition of the work of pioneering artist Dorothea Tanning (1910-2012)...

Organised in collaboration with the Museo Nacional Centro de Arte Reina Sofía in Madrid, it is the first large-scale exhibition of her work for 25 years and the first ever to span Tanning’s remarkable seven-decade career. Bringing together some 100 works from across the globe, over a third of which are shown in the UK for the first time, the exhibition explores how she expanded the language of surrealism. From her early enigmatic paintings, to her ballet designs, uncanny stuffed textile sculptures, installations and large-scale late works, it offers a rare opportunity to experience the artist’s unique internal world. 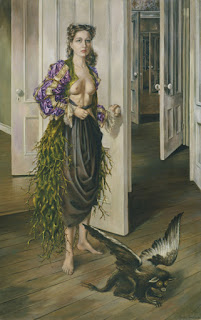 The exhibition follows the story of Tanning’s life and work, from her influential first encounters with surrealism in New York in the 1930s, through to her later years as a painter, poet and writer. Prominent early works have been brought together, such as the artist’s powerful self-portrait Birthday 1942 (Philadelphia Museum of Art) which attracted the attention of Max Ernst whom she married in 1946. These join key examples of Tanning’s mid-career prismatic paintings, as well as her later soft sculptures to show the full breath of her practice. 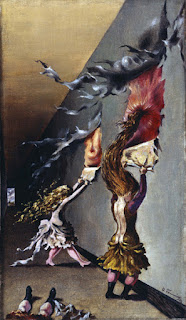 Born in 1910 in Galesburg, Illinois, Tanning wanted to depict ‘unknown but knowable states’: to suggest there was more to life than meets the eye. Early in her career she explored domesticity as a central theme; combining the familiar with the strange to turn the home into a surrealist space. Significant works from this period such as Children’s Games 1942 (private collection) and Eine Kleine Nachtmusik 1943 (pictured Top), exemplify Tanning’s interest in suppressed desires and burgeoning sexuality. Poetic imagery of young girls, domestic interiors and open doors are frequent motifs in these paintings derived from the artist’s love of Gothic and Romantic literature. This interest is also reflected in her fictional writings and poems, spanning from the 1940s to her last collection of poems Coming to That, published at the age of 100. 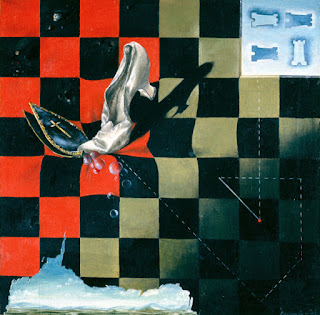 Tate Modern also explores the artist’s life-long passion for dance, music and performance, which became particularly prevalent in her more abstract paintings from the mid-1950s. Tanning described these works as ‘prismatic’, in reference to the effects of colour and elements of figuration which come in and out of focus, as seen in Insomnias 1953 (Moderna Museet, Stockholm). Beautiful examples of her set and costume designs for ballets by George Balanchine and John Cranko in the late 1940-50s are shown alongside dynamic figurative paintings such as Tango Lives 1977 (Moderna Museet, Stockholm) to shed new light on these images of splintered but sensual forms. 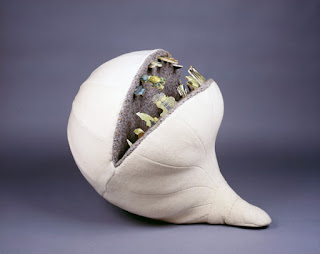 In the mid-1960s Tanning turned to her Singer sewing machine to make a highly original ‘family’ of soft sculptures that are a key focus of the exhibition. These hand-crafted, anthropomorphic forms, in between bodies and objects, inspired a legacy of their own in the world of surrealist sculpture, with echoes in the works of Louise Bourgeois, Sarah Lucas and others. Important pieces such as Etreinte 1969 (Museo Nacional Centro de Arte Reina Sofia, Madrid) and Nue Couchée 1969-70 (Tate) feature limb-like forms contorted, transformed and intertwined. A particular highlight is the room-sized installation Chambre 202, Hôtel du Pavot 1970-3 (Centre Georges Pompidou, Paris). At once sensual and eerie, this major work features bodily shapes growing out of the walls and furniture of an imaginary hotel room, transforming this interior space into one of surrealist possibility.

Find out more and book tickets on the Tate Modern website.