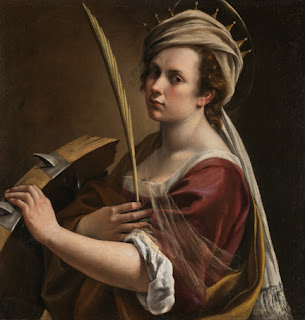 It's International Women's Day and, to celebrate, the National Gallery in London has sent Artemisia Gentileschi’s 'Self Portrait as Saint Catherine of Alexandria' out to the Glasgow Women's Library as part of their Artemisia Visits tour...

This recently discovered, rare self portrait, by one of the most celebrated female artists of the Italian Baroque period, shows a female figure turning towards the viewer. A halo is visible just above her head and her left hand rests on the top of a broken spiked wheel; a symbol associated with Saint Catherine of Alexandria, a Christian saint martyred in the early 4th century AD. Sentenced to death by the Emperor Maxentius, Catherine was bound to revolving wheels studded with iron spikes and nails. She escaped this instrument of torture through heavenly intervention, but was later beheaded.

Artemisia Gentileschi is considered one of the most accomplished painters among the followers of Caravaggio, whom she must have known personally through her father, Orazio. In an era when female artists were not easily accepted, she was the first woman to become a member of the Accademia del Disegno in Florence and had a truly international clientele, including royalty.

However, she faced challenges in both her professional and personal life: she was raped by a fellow painter and was subjected to gruelling questioning and physical torture during the trial that ensued. Her biography has long overshadowed her artistic achievements, but today she is recognised as one of the most talented painters of her generation.

Of the sixty or so paintings attributed to Artemisia, many feature a strong female hero as their main protagonist. Her paintings have often been read as autobiographical and there can be little doubt that her personal identity is closely intertwined with her artistic production.

Through spring and summer 2019, Artemisia's 'Self Portrait as Saint Catherine of Alexandria' is undertaking a series of ‘visits’ to unusual and unexpected venues (not all of them galleries or museums) across the UK. In addition to Glasgow Women’s Library, these will include a girls’ school and a health centre.

Director of the National Gallery, Dr Gabriele Finaldi said, “The National Gallery acquired Artemisia Gentileschi’s 'Self Portrait' last year and it now belongs to everyone. The tour ‘Artemisia Visits…’ takes this superb picture to a series of remarkable and unexpected venues across the country so that it can be enjoyed by people who may not be able to get to see it in Trafalgar Square.”

Sue John, Glasgow Women’s Library’s Enterprise Development Manager added, “The importance of Artemisia Gentileschi is irrefutable and this addition to our national collection is incredibly exciting. We are thrilled that her ‘grand tour’ will start with Glasgow Women’s Library, the only Accredited Museum dedicated to women’s history in the UK. As well as being able to see this stunning work, we look forward to welcoming people to participate in our public events programmes during this period.

Artemisia Gentileschi’s self portrait will stay in Glasgow until 19 March.


ABOUT GLASGOW WOMEN’S LIBRARY
Glasgow Women’s Library (GWL) is the only Accredited Museum in the UK dedicated to women’s lives, histories and achievements, with a lending library, archive collections and innovative programme of public events and learning opportunities. The organisation has grown from a small grassroots project into the main hub for information by, for and about women in Scotland and it is visited and enjoyed by people from around the world and around the corner. Based in an awarding-winning building in Glasgow's east end, GWL is open to all and has a presence across Scotland through their national programme of events and activities.

Find out more at www.womenslibrary.org.uk

Image - National Gallery - Artemisia Gentileschi, 'Self Portrait as Saint Catherine of Alexandria', about 1615–17