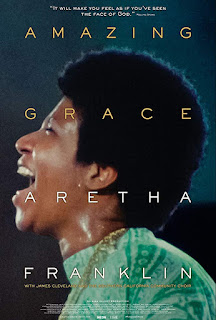 In 1972, Aretha Franklin recorded the album Amazing Grace at a church in South Los Angeles. The whole event got filmed but has never been released, until now. Watch the trailer...

The concert film was shot over 2 days at the New Bethel Baptist Church in Watts, Los Angeles on Jan. 13th and 14th, 1972, with a crew of film and sound engineers and five 16mm cameras, all directed by Sydney Pollack. It was finally brought to screen by director Alan Elliot, brought in after Pollack's death in 2007. The reason for the delay of more than 45 years is, allegedly, that Pollack was not experienced in filming music documentaries so didn't use a clap-board to synchronise the audio and visual together, resulting in under 3 of the 20 hours of film that he shot actually being usable and none of those featuring a complete song from the album.

In the months since the concert film did its award qualifying theatrical run, Spike Lee has also come on board as a producer, saying in a recent interview, “I saw it in New York when it had the short (Oscar-qualifying) run at the Film Forum, and it was mesmerizing and transformative. It’s the cinema version of going to church — the black Baptist church. It’s elevating. It’s spiritual. This, I think, is one of the seminal moments in American recording history. We’re talking about Aretha Franklin, ReRe, the Queen, in all her glory. What you see, what you hear, what you feel is 100 percent the truth. There’s no shenanigans. No special effects. No AutoTune. It’s just blood, sweat and tears up there. Another word is raw. The camera assistant is in the shot, there’s a sound blanket over the piano. It’s an unclean, unfiltered gem. And you don’t see that a lot today. Everything is so clean and spiffy and shined, it makes you blind. That ain’t this!”

Amazing Grace comes to UK cinemas on May 10th