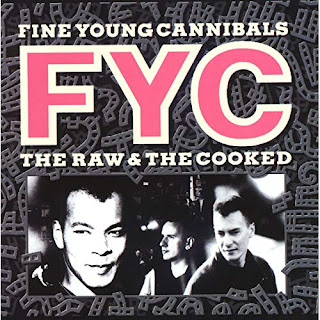 So many well-known albums turn 30 this year and Steve Taylor-Bryant and Susan Omand travel back to 1989 to revisit some of the sounds of their youth that made parents shout "Turn that noise down!" This week, Susan has an appetite for The Raw and The Cooked...

It was actually my Dad that got me listening to FYC in the first place. He was a huge Elvis fan and was surprised at how good their cover of Suspicious Minds (on their 1985 debut album) was. The more I listened to that (and it got played pretty regularly back in the day) the more I got hooked on Roland Gift’s unique vocal, so buying this album immediately it came out was pretty much a no brainer for me.

And it didn’t disappoint. From the signature snare start of She Drives Me Crazy (they recorded the snare part separately to create the more prominent sound) to the dying notes of their cover of Ever Fallen in Love, this a top album. The fact that six of the songs were released as separate singles (eight if you count the tracks only released in Europe) with two topping the US Billboard chart, in addition to the album itself, are testament to that, with so much of this album being instantly recognisable.

There’s a mix of genres too, with the R&B sounding Tell Me What sitting comfortably beside the soft rock of Don’t Look Back and the funky It’s OK (It’s Alright) balancing the almost techno sounding Don’t Let it Get You Down. The thing that you miss by listening to the album on streaming these days though is the physical “split” of the album – it was called The Raw and The Cooked because the first side of the vinyl was deliberately the “rawer”, less polished music reminiscent of an earlier Motown, Northern Soul, even a doo-wop sound, whereas the “cooked” side had a much more up to date, dance-beat, “produced” quality to the tracks.

But there’s one thing that ties it all together and that’s Roland Gift’s voice. His falsetto is remarkable, so much so that when he sings in a lower register for the ballad As Hard As It Gets, it takes a bit of getting used to. However, the uniqueness of his amazing timbre always shines through and is a voice I could (and did) listen to over and over again.

It’s a real pity, then, that The Raw and the Cooked was to be the last of their studio albums as a band. I think they could have weathered the techno/dance wave of the 90s and returned to a more mellow sound as the century turned but, what do I know? And, let’s face it, if they could get Jools Holland to play their piano on the original recording of Good Thing, they must have known what they were doing...