Turn That Noise Down - Dylan and the Dead 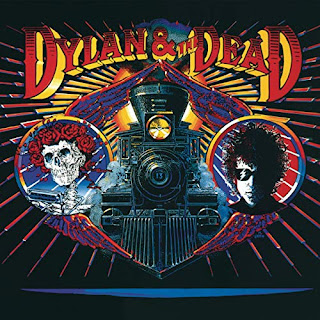 So many well-known albums turn 30 this year and Steve Taylor-Bryant and Susan Omand travel back to 1989 to revisit some of the sounds of their youth that made parents shout "Turn that noise down!" This week, Susan relives her weird smelling student days with Dylan and the Dead...

Dylan and the Dead is one of “those” albums that any patchouli-scented-psychedelic-hippy-student-protester-wannabe worth their tie-dyes (yes, myself included – well, there was this bloke…) bought when it got released 30 years ago, just to say they had it rather than because it was a great album.

Well, think about it. Bob Dylan is, undeniably, a genius when it comes to song-writing but he should really leave the singing to someone else. I can’t think of one of his songs that someone else hasn’t done better than he did. And, yes, that does include the GnR version of Knockin’ on Heaven’s Door (which I love but many, many people don't), so that kind of gives you a benchmark to work from. And the Grateful Dead? I think, by 1989, a lot of them were grateful they weren’t dead, to be honest, or maybe they were and it’s just that nobody noticed. But both Dylan and the Dead were huge icons, so much shrouded in rose-coloured right-on nostalgia (and funny smelling smoke) that anything they put out separately immediately sold to the student brigade, and a live “supergroup” style album with both of them on, using live recordings of a tour that Dylan did with The Grateful Dead two years previously, really must have been a no-brainer for the cynical marketeers.

So, okay, the album isn’t outstanding but it’s really not awful either. There are seven songs, all previously released on albums or as B-sides, and all written and sung by Dylan with the Dead as, well, as a backing band really. Slow Train opens the album – a protest-style song but dealing with themes around Christianity (it was written soon after Dylan converted in the late 70s) and really is better on the original studio album, Slow Train Coming, with Mark Knopfler guesting on guitar. I Want You comes next and it’s probably one of Dylan’s most covered songs, with everyone from Ralph McTell to Springsteen to Cher taking a crack at it. This live version it pretty good though and, for once, suits Dylan’s vocal. Gotta Serve Somebody follows on and is another of Dylan’s religious songs, pretty much Dylan does gospel, although it did win a Grammy award in 1979 so it must be good, right? Queen Jane Approximately is probably the best one on this album, one of Dylan’s more upbeat but still lyrically weighty songs, either about an actress’ fall from grace or a singer taking heroin depending on which story you believe, and Joey, a song originally written as a “collaboration” with Jacques Levy (meaning Levy wrote most of it), is about the downfall of the real-life Mafia hitman Joe Gallo and has quite a different feel to it.

The album rounds out with both the ubiquitous Dylan hits All Along the Watchtower and Knockin’ on Heaven’s Door and that’s it. So, yeah, it’s an okay album to listen to but nothing special… unless, like I did 30 years ago, you literally “buy in” to the awe-inspiring mystique of seeing the deific names of Bob Dylan AND The Grateful Dead on the one album cover.

By the way, we do all know who did the best cover version of All Along the Watchtower, don’t we? DON’T WE??