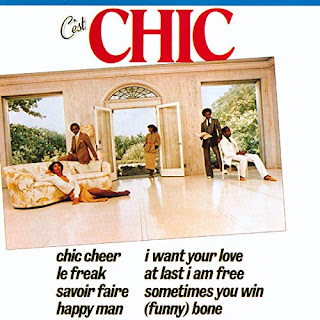 Inspired by our 1989 Turn That Noise Down (TTND) articles, Jimmy Hunter takes a look ten years further back to the music of 1979. This time, he is le freak for Chic...

Now those of us who've read bait about UK chart sales throughout the years will know there's been much controversy about chart shops and how record sales were, er, recorded for the purposes of the BRMB charts. Yes, we were diddled and sales figures now prove that by and large the UK charts were a representation of what was popular at the time according to submitted figures from selected record shops.

Tenuous and vague enough? Look at the album charts for this week in 1979 (28th January). Not much movement - a few bobbing up and down relentlessly, mostly buoyed by singles sales and manic over promotion by record companies.

And compilations. The chart is full of compilations of all sorts and nobody should be surprised at the "popular music" stars such as Jim Reeves and others I can't be bothered to recall because, after all, our 40 and 50 something parents were buying them.

My album choice for this weeks is an exercise in silk R&B soul disco - C'est Chic by CHIC. Now this album wasn't without controversy itself. It had previously been released as Très Chic in Europe (and I have an original copy) but recalled because of the risqué cover of a woman wrapped round a tube light. A point noted by the band and used as the album title for the follow up album later in 1979.

Now I always felt this to be unfair in many ways but mostly because of the fact that the European release had two additional tracks - the previous two single releases: Everybody Dance and Dance! Dance! Dance! (Yowsah! Yowsah! Yowsah). The baseline from by Bernard Edwards on both of those tracks just makes me ache with pleasure. The European realise was there now same as the US release and it spawned a couple of major hits, one in particular that took the US by storm - Le Freak, currently having a 5 week run at Nr.1 in the US singles chart - and the springtime release of I Want Your Love. Both were hits on the dance floor in Europe and the US. And the legacy of Le Freak has lasted and lasted.

The history of Le Freak is not a secret and was written in anger with their collective middle finger pointed directly at Studio 54. Some of the band members sometime in the late summer of 1978 had tried to get into the (in)famous New York club and failed - they were refused entry. They immediately went back to the studio and recorded the original lyrics of " One ... two ... FUCK OFF". Quickly though, once they realised they had something serious, the changed it to FREAK OUT and, well, the rest is history.

They followed up this amazing success with a single I love - I Want Your Love. It's silky, smooth and Alfa Anderson's vocals keeping the feel velvety soft. Edwards' bass line is subtle but complex and you never notice this until the inevitable solo. (Extended disco singles at the time all had a similar formula - intro, verse chorus verse chorus chorus ....... instrumental ....... (chorus) (key change) verse chorus crescendo to fade.) The hook in this track is clear and comes with the bell chimes in the chorus but I've always found it infectious and enjoyable.

I mentioned this with my last TTND79 choice and they're clearly connected. Nile Rodgers and Bernard Edwards seemed to batter their single releases with everything they had and left the album tracks somewhat wanting. This is evident in later albums and in many collaborative albums too but I do this C'est Chic is different. The album tracks mostly stand on their own merit. If you like soul funk then with Chic Cheer you're in for a treat. It's repetitive and that's the hook and was a hit exactly where it was aimed at - a hot sweaty dance floor.

Savoir Faire is a nod to George Benson and it's done well - the Rodgers / Edwards signature all over it, it's mellow and warm. The melodies are simple yet not dull and though it won't over excite, I find it a good solid track. Same with Happy Man although I find there's less substance to this track. The melody is infectious but I'm always glad when it finishes. It doesn't have the signature female lead vocal and though it's not badly done I find that even Edwards' complex baseline has been replaced with one that very much reflects the track - rather insipid.

The remaining tracks - so, what of them? Well they're largely forgettable and it irritates me that Chic does this. I'm a big fan of the group a massive fan of Nile Rodgers and get goosebumps when I hear a Bernard Edwards baseline - so why the fillers? Perhaps I'm being judgemental but no, I don't like them. But have a listen and see for yourself. The group had good success with their 2 1979 albums and the singles from 1978 to the end of 1979 did them well. A moment in time in the limelight but cemented them with a well deserved reputation of superb musicians. the cast of session singers and musicians below is testament to this and it paid off:

It's a good album and even if you weren't a fan of this genre at the time then find a mellow time with t glass of wine and listen to some really very enjoyable soul funk disco by the experts of that genre.