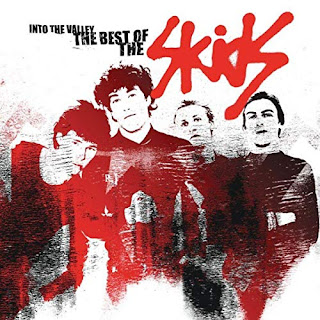 Inspired by our series of articles looking back at music released 30 years ago, Jimmy Hunter takes a step further back in time to give us a Song of the Day 1979. This week he ventures Into the Valley with The Skids...

With monotonous regularity I blab on about how big a fan I am of a good bass and a good bass line and I'll say it right now: I think this is one of the best, if not the best, intros in music history. This week, dear reader, I've come over all unnecessary by listening to one of my favourite tracks ever - Into The Valley by The Skids.

They had me within the first couple of bars and it's hypnotic. The lead guitar comes in with the hook and then off it shoots: I can't describe the goosebumps I got when I first heard this lying in bed trying to think of how I could get out of going to school. You can't recreate the feeling but I still get something very like it and, believe me, 40 years later ,performed live with a new line up apart from originals Richard Jobson and Bruce Watson, it's just as amazing!

The band formed in Dunfermline in Fife, got together by the late and much lamented Stuart Adamson (who went on to front Big Country) and came to the attention of legendary BBC Radio 1 DJ John Peel. It was the height of punk and The Skids was a punk band. A first album (Scared To Dance) followed quickly after supporting The Clash at various gigs and this single brought the band a whole new set of fans.

I remember pogoing to this at the school disco. In fact, I remember pogoing to this at the end of last December in Dundee at the gig (the whole place lifted with the refrain AHOY! AHOY!) and I didn't care what I looked like. Legend has it that the valley is a real one where gang fights used to happen. You'll never know from listening to the lyrics because Jobson's distorted accent is too thick but it's a song of futility of hate; a cry out from a part of society (the working class) that was being pushed further and further from an ability to look after itself (within 3 months a Prime Minister was elected who would show just exactly what that meant).

The bass line carries the whole thing - 3 guitars, drums, a vocal and a melody that has no place in a punk record but fits perfectly. It lures you into its seething reactionary rebellion, it taunts you and demands you join the gang. All the while it tells you that reality is put aside by those instigating this and the reason for this is a lack of a future.

Lyrics aside (though they're eloquent and brilliant) - this record is sheer joy!