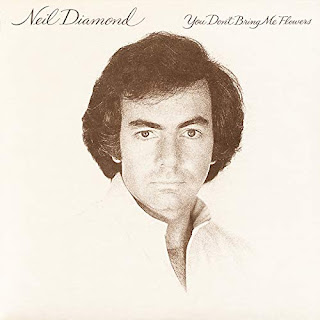 Inspired by our series of articles looking back at music released 30 years ago, Jimmy Hunter takes a step further back in time to give us a Song of the Day 1979. This week, he'd much rather be the Reverend Bluejeans...

The Reverend Bluejeans. Hmmm. Ok listen, I have something to tell you. It's not easy admitting this, but then coming out of the closet isn't easy: I rather like the music of Neil Diamond. There. I've said it. Obviously I can't tell my 87 year old father because it would be too much for him - after all, he was my age when he was a fan of the man.

And I really like this record. No, I've no idea why but it is incredibly catchy, a simply melody and I love his voice. None of this came to me as a 14 year when Forever In Blue Jeans was released, 40 years ago this week, by the inimitable and talented Neil Diamond.

It doesn't seem to have a beginning, middle or end and that's because there's no chorus - I know, he just didn't care! Three longish verses, starting quietly and slowly building to a crescendo with the normal repeat-to-fade ending but you know what? It's not repetitive. It has substance, it has no unintelligible lyrics and it's not shouty. What's not to like?

I saw a documentary on Diamond some 6 or 7 years ago - Hot August Night - and I'd encourage you to have a look at it. Why? Because I was not a fan, although his music was on in our house quite a lot when I was a bairn, and I remember much of his early 70s material - I like that too. He wasn't ever trendy, in fact he was deeply uncool in my circles (not "with it" as my Ma would say), but so what? It doesn't have to be cool to be good. It doesn't have to be cool for you to like it.

Dear music lover, sit back and tap your toes and smile to the gravely voice of Mr Neil Diamond recorded live a few years ago at Madison Square Gardens in New York...