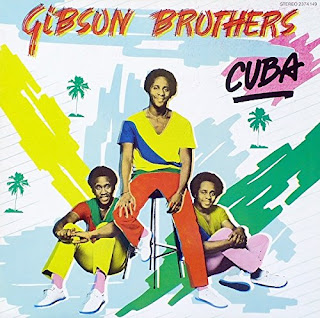 Inspired by our series of articles looking back at music released 30 years ago, Jimmy Hunter takes a step further back in time to give us a Song of the Day 1979. This week, he hits the dance-floor with Cuba ...

This week, dear reader, we're going all Latin. Latin disco, that is. For 1979 was the height of disco and although I'm trying to vary my choices, we shan't often wander too far from the dance floor.

What I find a little disappointing is how 1970's disco music has been rendered tacky - cute - aw bless - kind of expressions and it really shouldn't be - it should be treated with more respect. The (alleged) "really cool" people never liked disco but to ignore it and dismiss it is wrong. It has deep roots in black and gay culture going back to the 1960s, it invented the 12" single and the discotheque. It afford 100s of talented artists a career and to turn it into some kind of cheesy sentimental backing track to a TV programme or film is irritating.

And breathe. This week's choice of Cuba by French outfit, The Gibson Brothers, took a couple of attempts at chart success. Originally released in 1978 it eventually peaked just outside the top 40 in spring 1979. However, the band, made up of 3 brothers originally from Martinique, went on to have a couple of big hits in 1979 (Que Serra, Mi Vida and Oooh! What A Life) so Cuba was re-released in early 1980 and peaked just outside the top 10. That was about it for them - a couple of minor hits in 1980 and they disappeared from mainstream view, but stayed together making music and touring.

This song, however, grabbed me from the first time I heard it and I still find it joyous and uplifting today. This time the bass / bass line drives the music together with a thumping drum and drum machine resulting in a bigger hook than what the melody itself gives. It's relentless, sticks roughly to the usual 12" version format of the time ... verse-chorus-verse-chorus-verse-chorus-chorus-long instrumental-chorus-verse-chorus to fade and it makes me want to dance.

Using the piano on the instrumental section, brass in the background gives it a Latin feel. But that bass keeps coming back, pushing you with its hand-clap machine punctuated with loud cymbals, testing your cardiac fitness on the hot sweaty dance floor. Yes I got to experience this at the time, no I won't tell you where and all I'll say is that at 14, I was in heaven.

So, pop on your loud shirt and big gold medallion and let's hit the dance floor ...