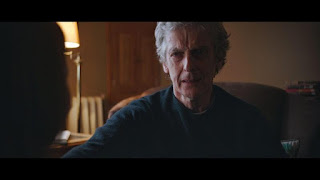 Lewis Capaldi has released a powerful new video for his song Someone You Loved and it stars another Capaldi...

Scottish actor Peter Capaldi plays the male lead in the poignant video, directed by Phil Beastall, which heightens awareness of the need for organ donors. While Peter and Lewis are distant cousins, the two had not met until Peter turned up at a gig of Lewis’ in London last year.

Inspired by the desire to create a video with a powerful message of loss and hope for the song, from the EP Breach which was initially released last November, Lewis was drawn to the topic of organ donation, and his Mum, who is a nurse, made him aware of the charity Live Life Give Life. After approaching the charity, the two partnered from the get go, collaborating to bring this powerful video to fruition and provide a vital boost to struggling members who are affected by the issues of organ donation.

Speaking of the themes and personal nature of the video, Lewis said “I wanted to do something a bit different to what I had before and try take the opportunity to raise awareness for something that I thought was deserving”. He continued “Coincidentally, while working on the video, I received a message from a fan of my music, Jim who is currently on the organ transplant list himself. For me, this solidified how important it is to try and raise awareness for this subject in order to help Jim and the many others just like him”.

That fan was Jim Lynskey who works closely with the donor awareness site Save9Lives to raise people’s awareness and understanding of organ donation. “I’ve been aiming to raise awareness for organ donation with Save9Lives which works in partnership with The NHS. I formed the campaign when I was transplant listed back in 2015 - it was the fact that one organ donor can potentially save 9 people which really stuck with me amongst the sobering statistics of current donor shortages in the UK. I’ve been unable to access a new heart so far, so I’m now being kept alive with an electric heart pump. I thought I would drive the frustrated energy associated with my experiences into this vibrant Save9Lives campaign message, and I’ve since received some very humbling support from many within the music industry. As a fan, it’s a huge honour to work with Lewis alongside his incredible Someone You Loved video. Signing as an organ donor at save9lives.com will allow us to track how many people have been inspired by Lewis’ powerful message illustrated in his video release. I’m sure I speak on behalf of the 6000+ patents awaiting a transplant today in saying thank you for raising such vital awareness, in celebration of Someone You Loved”


About Live Life Give Life:

At some point in our lives we all want to create a powerful legacy and make a positive contribution to the world. Becoming an organ donor is the first heroic step to creating this legacy – the gift of life. Live Life Give Life is committed to celebrating organ donation and inspiring the individual to leave a positive legacy that lasts for generations. Our goal is to motivate everyone in the UK to register as an organ donor. We want people from all walks of life to sign-up to the NHS Organ Donor Register, and to speak-up and share the decision they’ve made.