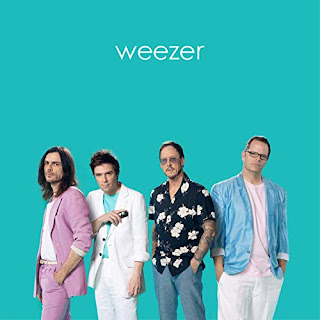 Susan Omand heads back to her comfort zone of the 1980's, kinda, and sings the praises of Weezer's latest release, an album of cover songs...

Weezer are a band that I vaguely remember from the 90s and their song about Buddy Holly that had the video filmed in Al’s diner from Happy Days. Then there was a great big gap of nothing on my radar until 2001 when they came back to the fore with Photograph and Hash Pipe, both of which I do remember from the time, and then a whole other load of nothing until I’d heard they had done a cover last year of Toto’s iconic 80s anthem Africa which was BRILLIANT (and the subsequent reciprocal cover that Toto did of Weezer's hit Hash Pipe - also brilliant.) So when I got wind of there being a whole covers album, released by Weezer as a surprise digital drop last week, I had to give it a listen.

Weezer’s teal album is, seriously, the covers album that I never realised I needed in my life. I love this.

That may seem like a bold statement but, when you look at the tracklisting, this 10-song, 36-minute album has to, at the very least, intrigue you. Well, it did me, and I sat there between the speakers with a goofy grin on my face the whole way through the first listen. The album starts with the Toto track, which is as awesome as it sounds, and then goes on to songs by Tears for Fears, The Turtles and TLC – all superb. They also pick up on bands whose name doesn’t begin with T (note to self – idea for a set of compilation albums for every letter of the alphabet. Needs to happen.) We get Rivers Cuomo’s stunning vocals on Annie Lennox’s Sweet Dreams, my God he was born to sing that, and there’s the absolute best “same but different” cover of Ben E King’s Stand By Me that I’ve ever heard – the heaviness of Patrick Wilson's percussion on what is originally such a gentle track just blew me away. There’s a magnificent revisiting of ELO’s Mr Blue Sky, the cover of Michael Jackson’s Billie Jean is bloody amazing, Scott Shriner's bassline is perfection, and Black Sabbath’s Paranoid is treated like you’ve never heard it done before, with guitarist Brian Bell making an excellent job on lead vocal duty for this one and Cuomo knocking it out of the park on lead guitar with the backline of Shriner and Wilson driving the whole thing hard. As an album of cover songs it is almost perfect.

There’s just one track on the album that didn’t quite hit the mark for me on the first few listens but, there again, I am overly precious about A-Ha and the voice of the marvellous Morten Harkett can not be bettered. Kudos to Weezer for trying Take on Me as a cover though, but it’s just not quite there for me yet. However, it’s not totally awful as a track and the rest of the album sure as hell makes up for it.

Stand By Me - Ben E King