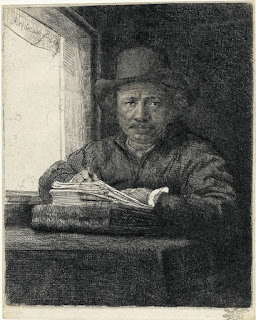 The exhibition features a stunning selection of drawings and prints by Rembrandt van Rijn (1606-1669) that reveal rare insight into the Dutch artist’s development and experimentation. Over 60 treasured works will each vividly showcasing Rembrandt’s hand at work, from quick sketches to fully realised compositions. Marking the 350th anniversary of Rembrandt’s death, this exhibition will be dedicated entirely to Rembrandt’s works on paper. The British Museum holds one of the most important collections of Rembrandt’s prints and drawings in the world, and this exhibition offers a chance to see works rarely exhibited due to light-sensitivity. 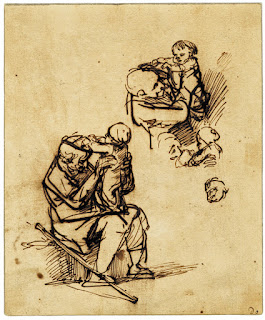 This exhibition examines Rembrandt’s creative process on paper by bringing together related subjects from throughout his life. Rembrandt’s prints were rarely commissioned and remained a personal venture. As such these are perhaps the best document of his working practice. Thematic displays of Rembrandt’s self-portraits, landscapes and biblical scenes will illuminate his artistic development, his changing techniques and stylistic shifts. 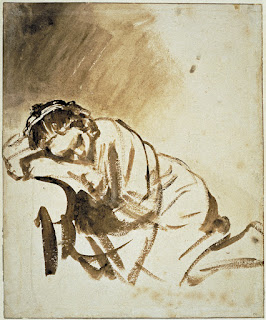 At the heart of this exhibition stands Young woman sleeping (Hendrickje Stoffels?) (c.1654) an evocative brush drawing of the woman thought to be Rembrandt’s late lover caught in an intimate moment of rest. Rembrandt’s depictions of women seem to offer a poignant glimpse into his personal life. His studio was located in his home, as was customary at the time, and he drew women both in formally posed sessions and in spontaneous moments in the household. Other depictions of women include Rembrandt’s early portrait of his wife Saskia ill in bed. 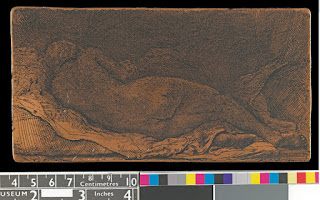 On display for the first time is Rembrandt’s printing plate for Reclining female nude (1658), alongside an impression of the print, giving technical insight into Rembrandt’s printmaking practice. Rembrandt was keen observer of life, as seen in his drawings and informal ‘study sheet’ etchings. His pen-and-ink Sketches of an old man and child (c.1639-40) reveal how he captured movement in quick studies from life, as two sequential sketches show a child playfully removing a hat from a man’s head. 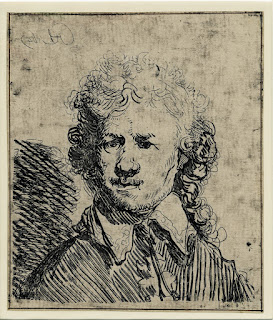 Rembrandt was the first artist to produce a wide range of self-portraits in print, and depicted himself in various guises and moods. On display will be one of Rembrandt’s earliest prints, the unusually large Self-portrait, bareheaded, bust in frontal view (1629) of which only two impressions are known, as it was never intended for distribution. This is presented alongside Rembrandt’s later, well-known work Self portrait drawing at a window (1648 - pictured top) where Rembrandt depicts himself at work drawing his own likeness on a copper plate. These diverse prints reveal how the artist’s image shifted from a studio exercise and developed into a marketable product, perhaps not dissimilar to self-fashioning a public image in today’s world. 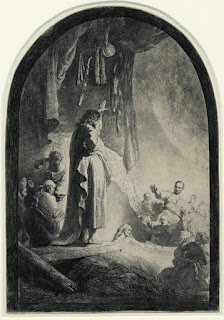 A final section of the exhibition will examine Rembrandt’s religious works, encapsulating his shift from Baroque drama to quiet introspection. Rembrandt treated the subject of St Jerome over seven times in print, and on display will be a selection of prints reflecting his changing interpretations of the saint. Chronological comparisons will reveal the artist’s relentless pursuit of new pictorial possibilities. Rembrandt imbued light with religious significance in his works, creating dramatic moods as captured in Raising of Lazarus (c.1632, pictured above) which shows the shocked onlookers behind Christ. Later in his life, Rembrandt created some of his darkest and most complex prints. A highpoint of this section will be his late, large drypoints the Three Crosses (1653 - pictured bottom) and Ecce Homo (1655, pictured below), displayed in a sequential run. 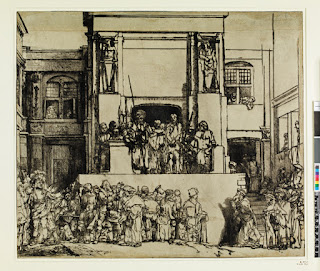 Rembrandt is among the best-loved of Old Master artists, and this exhibition offers a rare opportunity to view his creativity on paper. It also marks the completion of the landmark publication Rembrandt and Rembrandt-school drawings (British Museum research publication by Martin Royalton-Kisch, published online in 2009 here), and attests to the Museum’s continuing work on Rembrandt, as well as its great collection of Rembrandt’s works on paper. 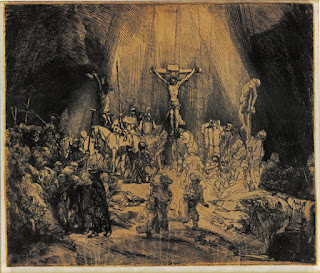 Rembrandt: thinking on paper will run from 7th February to 4th August 2019 in Room 90 at the British Museum and is FREE to view.