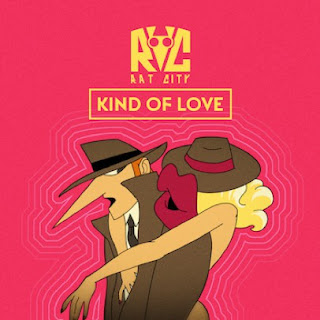 Rat City looks, from the outside, like your typical urban metropolis, but behind the glitz and glamour it’s exactly as it sounds - a hotbed of seedy characters stabbing each other in the back at every turn. Friends and enemies interchange fluidly as they let their primal instincts call the shots. Even the police are criminals here. One thing is for sure nothing is ever as it seems in Rat City.

A high concept audio visual project seamlessly fusing song and image, Rat City was conceived by Norwegian songwriter/producers Kent and Cato Sundberg. Lasse Michelsen joined in 2018 and more recently, animator/designer Micah Monkey signed on to the Rat City collective as creative director.
As writers/producers, the brothers Sundberg have been a part of the Stargate stable and have had six #1 songs across Scandinavia with their own band Donkeyboy, while as producer/writers they have had hits with Lila and Chris Holsten among others. Master animator Micah Monkey recently directed Eric Clapton’s "White Christmas” video, a heart-warming holiday Claymation masterpiece (watch that here). Lasse has been a part of the Donkeyboy/Rat City production team for several years whilst working on a number of outside projects in his native Norway.

Cato, Kent and Lasse all play their own parts in Rat City where a revolving cast will appear alongside the key characters in different videos and short films as the project rolls out:

A shamed Detective turned Private Investigator, Frank has never given up on two things: a lead or a dame - both of which consistently leave him on the wrong end of a revolver. Still, that's has never stopped him from cracking a case.

A thug in its purest form, Dean is nothing but trouble which is a huge asset for a nefarious underworld crime lord. Crime outweighs justice in Rat City, and you better believe Dean has something to do with all of it.

Eccentric lounge singer Sam is always in the spotlight at the local casino, when he's not selling secrets to one group or another. He has hand on the pulse of everything that happens in Rat City, and all the bad news that goes along with.

On the Rat City ‘Kind Of Love’ video, directed by Micah Monkey "It seemed like just another lead for Frank, Rat City’s most notorious detective. That is until he met her; a femme fatale in the truest sense of the word. In typical Frank fashion, this beautiful woman blinds his judgement, leaving him unable to realize that she has been hired by the very person he has been tasked to investigate. And unfortunately for the lovesick Frank, this "hot lead" will only lead him to a double cross... and a watery grave."