News - Kernow in the City 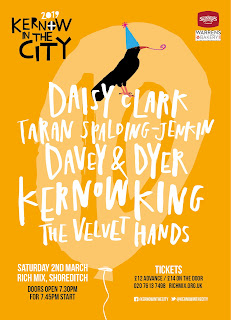 Now in its tenth year, Kernow in the City will return this Pirantide (that's 2nd March in case you don't know) with London’s annual mini-festival of Cornish contemporary music and culture...

Once again, the Rich Mix venue in the heart of Shoreditch plays host to an eclectic mix of Cornish pop, folk and rock music, comedy and poetry in celebration of St Piran’s Day, Cornwall’s patron saint.

Headlining this year are acclaimed garage rockers THE VELVET HANDS - born out of the NME-coined ‘Kernow Wave’ rock scene and renowned for blending slacker story-telling with belting guitar riffs, reminiscent of The Strokes or The Vaccines, and rousing punk choruses that recall The Clash. Firing on all youthful cylinders with effortlessly cool style, The Velvet Hands have art in their heart, as evidenced by last year’s stand-out album ‘Part’s Over’ which gained them national air play on Radio 1 and 6Music.

In support, all rise for the return of Cornish royalty, the KERNOW KING, already a national treasure back in the homeland. He brings his comedic take on everyday Cornish life to London once again and, well, he’s the King of Kernow so you better be there – it’s your duty! 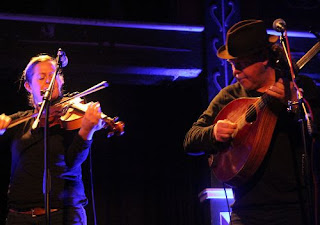 Musical support also comes in the form of DAVEY & DYER, leading components of traditional Celtic music, who can kick up a storm armed only with bouzouki, fiddle and viola. Their repertoire of new and old Cornish music, taken from their recent album Dynamite Quay, will have your moving your feet to their jigs, reels and polkas, not forgetting the exotic beauty of the Cornish five-step.

The YouTube generation probably need no introduction to DAISY CLARK, who burst onto the scene a few years ago with her unique cover version of ‘Hopelessly Devoted To You’ which led to her being voted ‘Best Unsigned Female at the Best of British Radio Awards in 2017. With much success on the festival and acoustic following on, we are delighted that Newquay’s Daisy will open Kernow in the City 2019 this year.

Finally, poetry has long been a feature of this event and we are sure you will love the exceptional talent that is TARAN SPALDING-JENKINS. His work deals with his relationship with Cornwall and childhood there, drawing on its rich culture of legends and language, as well as more contemporary issues that befell the modern Cornish back home and abroad.

The night will be fuelled with ales from Skinner’s Brewery and Cornish pasties from Warrens Bakery in St Just-in-Penwith and will include a rousing collective ‘shout’ of Trelawny and all your favourite Cornish pub songs, led by the Wrecker’s Wednesday team, KitC’s monthly social night spin-off event. So, if you’re in London and you love Cornwall, come one and all to celebrate our national day at Kernow in the City on March 2nd.

Images - Kernow in the City