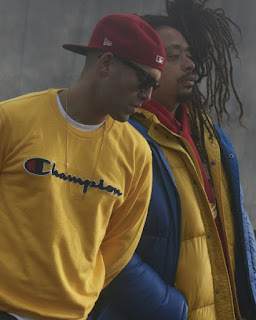 “So long as the Stone of Brutus is safe, so Long shall London flourish”

Conceptually, the project is inspired by the legend of the Brutus Stone or London Stone which was purported to have been lain by Brutus of Troy as the foundation of the city of Trinovantum, “The New Troy In The West” – or as we know it – London.

This genre-defining collaboration with Muad’dib is legendary flautist Flutebox’s first ever studio release, so he really wanted to make sure that the art was right. ‘It’s about identity.’ he says ‘More than anything else, I’m from London. This is where I can give directions. I’m not trying to beg some other identity, really. And London means so much to mixed race people. That’s the most honest thing about this. It’s London as a 3rd – and perhaps predominant – identity’.

Over the years, writers such as Chaucer, Shakespeare and Alexander Pope have been inspired to add their own elements to the legend of Brutus and the stone. Roy Stephenson, head of archaeological collections at the Museum of London describes the stone as “the Dead centre, the throbbing heart which everything around London revolves”. It’s an artefact that has survived the great fire, the blitz and has lived through the ever-changing face of the most amazing, diverse city in the world.

Wicked Labour starts of like a late 50s soul jazz record with long, thoughtful chords that quickly unfolds into banging 808s that frame unmistakably UK grime and hip hop flows. The record is journey of changing landscapes that opens up into an epic, orchestral, cinematic panorama for the ride-out, but it never loses a sense of continuity or direction – even though when you consider the music retrospectively, it perhaps should. The track features LA/London-based artist Brielle aka Aprilfoolchild and UK emcees and brothers Blackk Chronical and Phoenix Da Icefire.

Overall, the Brutus Stone is an intriguingly unique project. It moves through soul, jazz, grime, hiphop and trap – an ode to one of the most aspired-to cities on the planet.

Flutebox and Muaddib have known each other for around a decade. After meeting in the summer of ’09 as artists performing at Bestival, they have composed, played and toured together, sharing stages with Jamelia, The Fun Loving Criminals, Jamelia and José González to name a few and have become genuinely close friends. ‘Flutebox was at my dad’s 9 nights,’ Muad’dib recalls, not looking up from his mobile. ‘That shit means a lot where we’re from’.


Find out more about the real London Stone - https://www.museumoflondon.org.uk/discover/london-stone-seven-strange-myths
Order the EP on Bandcamp