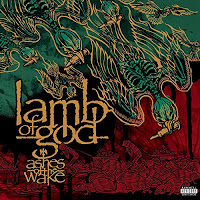 In an effort to further her musical education, Susan Omand has been set "homework" of listening to albums released after the 1980s that she has missed out on. This week she says BAAA to Lamb of God's album Ashes of the Wake...

*Sigh* I really thought I’d gotten past it. [You are past it. Remember you are quite old… – Ed] Shut up, that’s not what I meant. I really thought I was past having problems with the RAAAARRR vocals on some of these Educating Omand choices. Sadly it appears not, as the unintelligible roaring on Lamb of God’s album Ashes of the Wake really spoiled what could have been an excellent listen if the singer could have been bothered, well, actually SINGING. Or even speaking more tbh. The insidiously creepy voice near the start of the first track Laid to Rest, apart from the fact it reminded me of that Bodyrockers song, was actually quite effective and worked well against the tremendous guitar work and machinegun-like percussion. I could have listened to that quite happily for the whole album.

As it was, I didn’t even really notice when the song changed to Hourglass as any difference got drowned out by the vocal. The next track, Now You’ve Got Something to Die For is somewhat forgettable but I enjoyed the driving drums and the constancy of the guitar arpeggios. The Faded Line was actually a bit better and I’ve narrowed that down to the fact of it being a bit slower so the lyrics were more intelligible. This decrease in tempo also helped to add a level of menace to the mix that was interesting. Omerta is again “one of the slower ones” at least to start with and the instrumental arrangement, especially through headphones, is superb. I also adore the spoken intro. It’s just a real pity about the roaring… however, now and again in this track we do get a slight variation in the tone of the noise so it’s nearly singing. But only nearly.

The rest of the album had good bits balanced by not so good bits. Blood of the Scribe had another speaky bit which was very good but added a different kind of roar nearer the end that sounded more like the cat being sick than anything menacing. The fretwanky guitarwork and stereo-flipping on One Gun were very impressive, but Break You was ultimately forgettable noise although the percussion on Break You was brilliant. Poor guy must have been knackered by the end of the track but at least he would have got a bit of a rest on the last track as Remorse Is For The Dead is as near to a ballad as you’ll get on this type of album. The guitarwork on the first minute of that final track was beautiful but it fell away after that into generic thunka-raar noise. Pity.

Which leaves the title track itself. I surprised myself that this, and not the more melodic ballad-y thing was my favourite track on Ashes of the Wake because, although it was “noise” in bits, it was incredibly interesting noise. The use of stereo was suitably disorientating, and the drums and guitar were almost early 70s in their psychedelia and utterly brilliant. Add in the use of the radio-like echo on the speaking vocal along with the choice of subject matter and it felt like a hard rock version of a classic ‘Nam anti-war protest song updated with a Paul Hardcastle-esque “19” edge. I loved it.

Why couldn’t the whole album have been like that though? A slight regressive step in my appreciation means I think I’m maybe not quite as educated as I should have been for this album.