Turn That Noise Down - Warrant 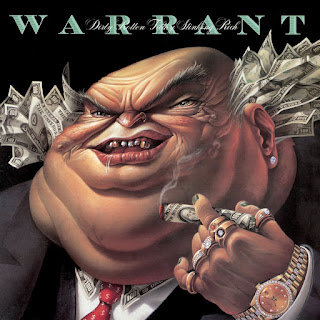 So many well-known albums turn 30 this year and Steve Taylor-Bryant and Susan Omand travel back to 1989 to revisit some of the sounds of their youth that made parents shout "Turn that noise down!" This week, Steve gets Dirty Rotten Filthy Stinking Rich and Warrant...

I thought I liked Warrant more than this but unfortunately I may have been thinking of someone else, or perhaps a different album, because this is straight from the generic blueprint of hair metal bands in the 1980’s. Honestly, this album could be Poison or Mr Mister or Cinderella. It’s not bad in the sense that they can’t play, the songs are recorded by very good musicians, it’s just not a patch on Motley Crue, Guns n Roses, Skid Row, or even Bon Jovi. It’s almost forgettable such is the repetitive nature of the tunes and I know that’s a harsh criticism but honestly I’m bored now and I’m only on track 7.

There’s no real highlights, just very samey sounding harmless songs that belong on some teen movie of the era. 32 Pennies isn’t all that bad if I have to pick a song to listen to more than once. Heaven is Warrant trying to do Every Rose Has a Thorn, and failing massively. Cold Sweat belongs in a child’s garage band, it’s just so not what you expect from a band with a record deal. In fact the only thing I like is the cover art.

At this point of the article I’m supposed to find a video of a song from the album that you may enjoy, but I can’t put you through that so I’m cheating. Here’s Cherry Pie from 1990 instead. Maybe I’ll revisit that album next year and see if that’s why I thought I liked Warrant.