Turn That Noise Down - Skid Row 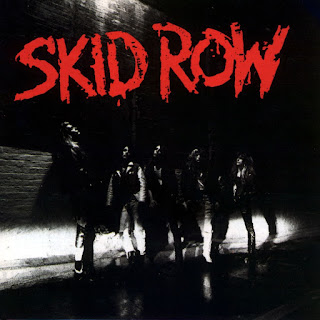 So many well-known albums turn 30 this year and Steve Taylor-Bryant and Susan Omand travel back to 1989 to revisit some of the sounds of their youth that made parents shout "Turn that noise down!" This week, Steve relives his youth gone wild days with Skid Row...


That’s better, we’re into 1989. I’m now 14 and no longer a boy, I’m a boy who knows everything there is to know about life. Obviously I’m joking, I’m currently approaching 44 and still don’t anything, the fact I’m still here is more luck than judgement. In 1989, though, my musical life changed and my note-based education rapidly improved. I was lead percussionist for the school orchestra, 2nd percussionist for a successful brass band (we won the Area Championship and finished fourth in the Nationals up against professional colliery bands) and drummer in my first proper gigging rock band. I listened and played to so much multiple genre stuff that my brain really opened up and I was at least ready to make immediate judgement on what worked and what didn’t and be able to back up my reasoning. My favourite genre was easily rock/metal (remember those days where there was only two genre titles within rock music? I miss those days) and in 1989 a band stormed onto the scene out of New Jersey called Skid Row.

Their self titled first album was phenomenal at the time. Not quite Guns n Roses cult feel but massively elevated above any hair metal band popular at the time. They also weren’t quite the force they became with 1991’s classic Slave to the Grind with its anti-corporate, anti-politics themes but, as debuts go, Skid Row really worked and, with Bon Jovi and their lot almost owning the band if you like, the production values on the record are insane, so much more professional sounding than most debut acts get. It still, 30 years later, sounds like it was recorded yesterday. The album opens with Big Guns and, as far as songs about gratuitous sexual women go, it’s a stonker. Obviously massively crude and, as a (slightly) more mature man, I appreciate these kinds of songs are not correct and rightly deserve to be left in the past. But as a 14 year old who was about to discover what a boob looked like? Awesome. The band are tight, loud, with some great breaks and, as introductions to Sebastian Bach’s voice go, there isn’t many better. Sweet Little Sister lyrically hasn’t moved on from the opener but, musically, the band show what they’re capable of and it’s the first chance I had as a fan of drummers to sit up and take notice of Rob Affuso. Can’t Stand the Heartache is a little too similar to everything else released by rock bands in that era and even Bach sounds disinterested as he sings. Perhaps too much of Bon Jovi’s influence crept through on this one but Piece of Me with that bass intro from Rachel Bolan and Bach quite literally snarling the words was a great first listen and a firm favourite on the numerous times I got to see them live.

Anthemic ballad 18 and Life is next up and instantly takes me back to my childhood discovering Headbangers Ball on MTV where this song was probably overplayed. Still a beautifully put together song by a band who have found their feet. Rattlesnake Shake is a favourite album track of mine but I honestly couldn’t tell you why. There’s nothing musically special about it, it’s generic 80’s rock but for some reason I always wanted my covers band to play it. Let’s use the word ‘anthem’ again. Youth Gone Wild was my teenage years, the soundtrack to the next couple of years for me. I will not hear a bad word about this song because

‘Since I was born they couldn't hold me down
Another misfit kid, another burned-out town
I never played by the rules, I never really cared
My nasty reputation takes me everywhere’

I’m not sure I’d want to write the song that follows Youth Gone Wild on an album but, to be fair, Here I Am is really good, fantastic live. Another lifetime favourite. Makin' a Mess is another fast paced tune that shows of both Snake Sabo’s guitar skills and Bach’s effortless lyric spitting. There’s something great about Makin' a Mess even today even though it hasn’t aged as well as I’d have hoped. Inevitable follow up ballad I Remember You is a lovely song, it’s perhaps a more generic rock love tune and not a patch on 18 and Life but I’d still listen to this over anything released by Warrant or Cinderella. Midnight/Tornado hint at the heavier sound we’d get in 1991 and Bach is on top form vocally backed up by some unnerving back up vocals.

Skid Row was a great album then and still is now, it’s got some timeless classics amongst some that haven’t quite carried the tests of time. It’s not a patch on what was to come but is still better than any release post-Bach. As debuts go there is not many better, with every member of the band having their time to shine and Bach’s voice instantly becoming one of the best to ever grace a rock show.