Turn That Noise Down - Rush 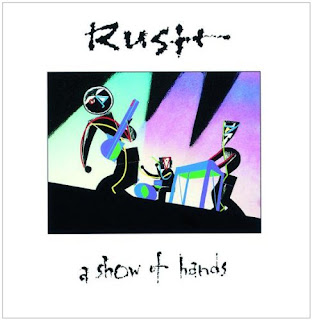 So many well-known albums turn 30 this year and Steve Taylor-Bryant and Susan Omand travel back to 1989 to revisit some of the sounds of their youth that made parents shout "Turn that noise down!" This week, Susan asked for A Show of Hands...

Rush is what you'd get if you crossed Marillion with Bryan Adams.

I've been listening to the Canadian rock band for many years now, ever since I was introduced to their work at 15 and, when I saw their name on the list of albums for this year I jumped at the chance.

A Show of Hands is a bit of a cheaty album for TTND really though, as it's made up of live performances for their 1988 concert tour of already released tracks. Think of it as a Best Of but without their very best work on it - their best being, as we all agree, the first 'concept suite' side of 2112 on vinyl - but as compilations go, it's a pretty good one.

Featuring songs from five different albums, it kicks off with a suitably surreal intro fanfare that intermeshes nursery rhymes, jazz and big band orchestral work with a real cartoonish feel before it kicks up the guitars and settles into the Marillion-esque The Big Money. Subdivisions is so much early 80’s synth and instantly recognisable as a single of their Signals album which got a lot of radio play when it was released the first time (1982). Marathon is next and is one of the singles from this 1989 album, despite having been released 4 years previously. It’s one of the slower tempo tracks on the album but that’s not to say it’s slow. This album benefits from not having a lighter-waving ballad on there ,keeping the whole feel of it upbeat. Turn The Page is next and is very Miami Vice, before the tempo drops slightly (but only slightly) again for The Manhattan Project. And so it goes on with each track a variation on the last, for an album’s worth of good solid rock songs, all well known to Rush fans, if not quite so memorable to others, and sounding just as good live as they did on their original studio recordings. And then we get to The Rhythm Method, which is by far my favourite track on the album.

The Rhythm Method delivers exactly what you would expect it to - rhythm. Consisting mostly of Neil Peart showing off on his drum kit in an epic solo with just bursts of noise from tuned percussion like xylophones, it is so unlike the rest of the album and it really excites the jazz fiend in me.